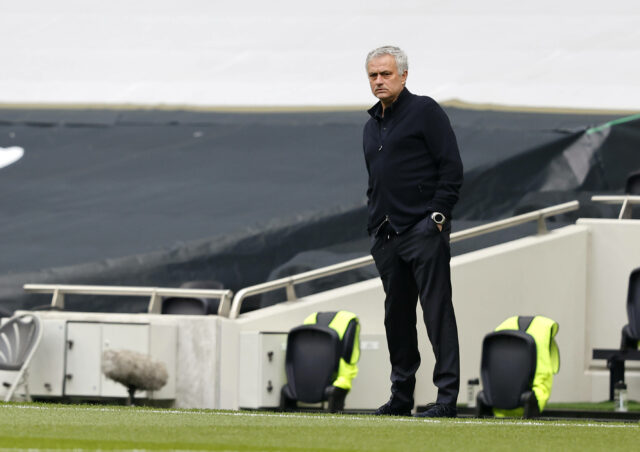 Jose Mourinho was left disappointed with the comments made yesterday by Manchester United boss Ole Gunnar Solskjaer on Heung-min Son.

Spurs missed the chance to jump into the top-four after losing 3-1 against the Red Devils in the Premier League at the Hotspur Stadium on Sunday.

United came from behind to snatch all three points with goals by Fred, Edinson Cavani and Mason Greenwood in the second half.

In the first half, Cavani’s smooth finish from Paul Pogba’s pass was controversially ruled out by referee Chris Kavanagh following a video assistant referee consultation, with Scott McTominay adjudged to have caught with his trailing arm.

Solskjaer reflecting on the incident said to BBC Sport:

“If that was my son and he stays down, and he needs his mates to help him up, he doesn’t get food because that’s embarrassing.

“The game’s absolutely gone. If that’s a clear and obvious error, it’s an obvious error he had to look at it. It was a perfectly good goal.

“They are conned [by Son]. We weren’t conned – the referee was.

“Unfortunately, the referee decided we are not playing football or VAR decided probably. I’m absolutely shocked if that is a foul.

Journalist Jonathan Veal has claimed on Twitter that “Mourinho’s rant was unprompted” as he wasn’t asked about it.

Mourinho’s reaction, via Football London:  “First of all, let me tell you something. I’m very, very surprised that after the comments that Ole made on Sonny, you don’t ask me about it.

“Because – and I told Ole already this because I met him just a few minutes ago – if it’s me, telling that player A, B or C from another club, if it was my son I wouldn’t give him dinner tonight, what would be the reaction of that? It’s very, very sad.

“I think it’s really sad that you don’t ask me about that.

“It’s sad you don’t have the moral honestly to treat me the same way as you treat others.

“In relation to that, I just want to say that Sonny is very lucky that his father is a better person than Ole. I am a father. I think as a father you have always to feed your kids.

“Doesn’t matter what they do. If you have to steal to feed your kids, you steal.

“I’m very, very disappointed. As we say in Portugal, bread is bread and cheese and is cheese.

“I told Ole already what I think about his comments, and I’m very disappointed that in five, six, seven questions, you ignore the dimensions of that comment.”

Son gave Spurs the lead before the break, but the visitors managed to secure an impressive win that leaves them 11 points behind leaders Manchester City with a game in hand.

Both Pogba and Fred were outstanding in midfield for United, but Cavani, 34, showed why he is revered as one of the best strikers.

For Tottenham, the defeat leaves them six points behind fourth-placed West Ham United in seventh, and they need to get back to winning ways at the earliest.

In other news, check how Manchester United fans reacted to Mason Greenwood’s cameo vs Spurs.