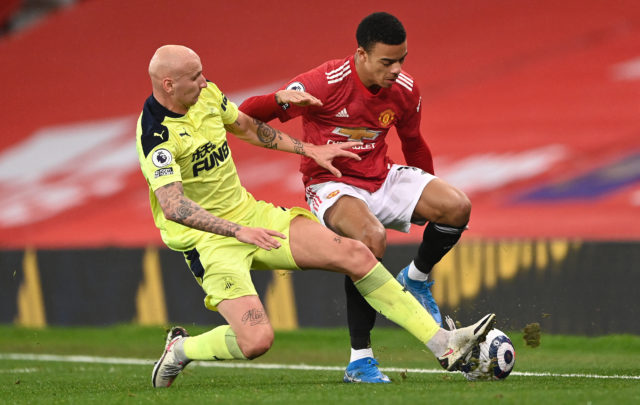 Newcastle United midfielder Jonjo Shelvey has shed light on what it is like to play against Marcelo Bielsa’s Leeds United.

The Whites have done incredibly well upon returning to the Premier League for the first time in 16 years under the management of Bielsa.

The Yorkshire club have played an attacking brand of football and they have never parted ways with their style despite some heavy defeats on the road.

Another trademark feature of Bielsa’s Leeds is that they cover a lot of distance and they press incredibly hard, almost squeezing the life out of the opponent.

Whether it’s the first minute or the final minute, whether they are winning or losing, it’s been the same in almost every game.

Shelvey recalls the match when Leeds visited St James’ Park in January. The Whites won 2-1 in that game which Shelvey feels they shouldn’t have lost.

When asked what it’s like playing against Leeds, Shelvey said to Studs up:

“They do run everywhere but they obviously leave themselves open. We lost the game but I just think it’s been a shame to be fair where they’ve not been able to have fans in their stadium.”

The Newcastle midfielder also recalls what he told Rodrigo who was running all over the pitch.

“I think it was about a month ago now, and that Rodrigo fella was in the middle,” he added. “He was meant to be playing central midfield and he was just all over the place.

“I said to him – ‘Geez, can you just stand still for one minute? because you’re running around like a nutcase. Even like some of it was just pointless running.

Leeds will face Aston Villa in the Premier League on Saturday at Elland Road.

The Whites are heading into this game on the back of a 3-0 win against Southampton. However, they will be without Rodrigo and Kalvin Phillips for this game once again.

In other news, BBC Pundit Mark Lawrenson states his prediction for Leeds vs Villa.