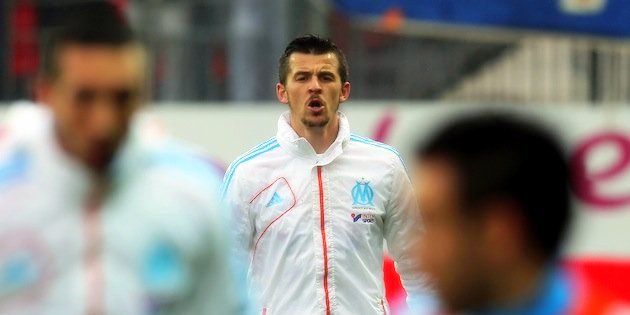 Barton, the Nietzsche influenced footballer revealed the news on Twitter that his Marseille teammate Loic Remy has signed for QPR. The 30-year-old, who tweeted the day before about Remy’s possible chances of joining Newcastle United, took a snipe at his former club blaming north-east club’s managing director, Derek Llambias for failing to land the player.

Hamann struck the boot in with his moral precept, albeit rightly, said to Barton to ‘do yourself a favour and stay out of club politics QPR and NUFC have paid you well for playing not to comment on recruitment’.

About 50 tweets and messages have been exchanged between the two, and though the former Germany international maintained his composure and dignity in his written 140 words speech every time, Barton crossed the limits (as usual) and wrote offensive words like “maggot”, “a dog” and “blert”.

Barton has posted a statement on his personal website where he has apologized for his behaviour with a pledge of drawing a line on the subject. It read:

“On Monday evening tweets exchanged between Dietmar Hamann and I went beyond the boundaries of banter, opinion and common sense.

“I accept that my comments were offensive, untrue and related to matters of a personal nature, of which I had no knowledge.

“I have apologised to Dietmar personally and now wish to apologise through the same social media channels that I used to make them, as well as my own website.

“I appreciate my comments have caused Dietmar and his family some distress and I fully regret that.

“I also appreciate that my comments should not have been made, as they could have damaged Dietmar’s reputation, which should remain intact as a fantastic player and ambassador for German football, as well as the game in general.

“Dietmar and I have now agreed to draw a line under the unfortunate exchange and neither of us will be making any further comments on the subject.”

Joey Barton is still irrevocably Joey Barton and his bond with Twitter has always been a dangerous cocktail, bordering on recidivism more often than not. He is currently on loan with Ligue 1 outfit Marseille after his parent club QPR have lost patience with him following his final day blunder against Manchester City and other recurrent annoying behaviours.