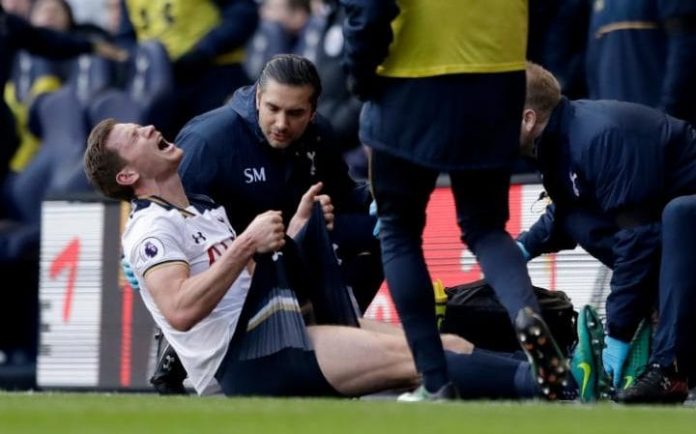 Tottenham’s bid for the Premier League title suffered a blow on Tuesday as Jan Vertonghen learned the extent of his ankle injury. The central defender has sustained ligament damage, and is therefore likely to miss a number of upcoming matches. Manager Mauricio Pochettino is set to reveal more prior to Saturday’s clash with Manchester City.

The injury came about when Vertonghen turned his ankle while lunging for a ball during last weekend’s 4-0 rout of West Bromwich Albion. The Belgian defender appeared distraught as he headed immediately down the tunnel for treatment.

Pochettino is likely to be equally upset at losing one of his key players at a crucial time. Spurs face trips to City and Liverpool in coming weeks.

Tottenham have been in red-hot form, winning their past seven games in all competitions. At the moment, they represent Chelsea’s closest challengers after ending the Blues’ 13-game winning run at the beginning of the month.

Vertonghen has established himself as one of Tottenham’s most consistent performers since joining the club from Ajax in 2012. He was a mainstay in the team which competed for the title last season, and has retained his place in the side during this campaign.

He has featured in 20 out of 21 Premier League games. Moreover, he is part of a miserly defence which has conceded just 14 goals, the lowest in the division.

Either Kevin Wimmer or Ben Davies are likely to come in for the injured Vertonghen on Saturday at the Etihad Stadium. Both are full internationals and capable deputies, but City will fancy that Vertonghen’s absence boosts their chances of bouncing back from Sunday’s crushing defeat at Everton.