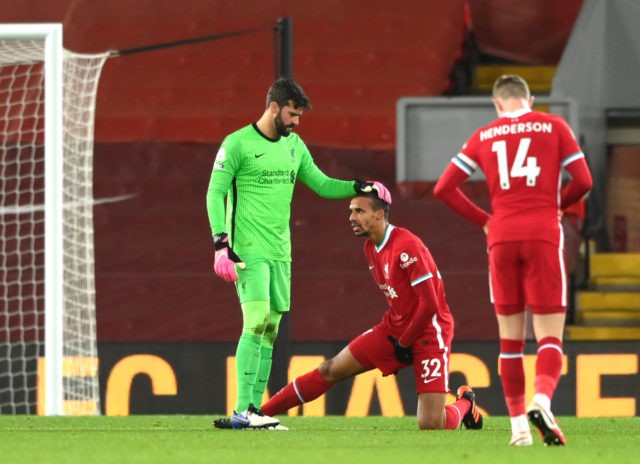 Jamie Carragher has suggested that Liverpool are still the best team in the Premier League even without Virgil van Dijk but at the same time has admitted that their fragile defence could cost them the title.

Liverpool were held to a frustrating 1-1 draw against West Bromwich Albion on Sunday afternoon at Anfield. Sadio Mane gave the Reds an early lead, but the Baggies sealed a point when Semi Ajayi scored a dramatic late equaliser.

It was a disappointing result for the Reds, but even more frustrating was the injury blow the club suffered after Joel Matip was forced off in the second half.

The Cameroon international felt some discomfort in his leg on the hour mark and he was replaced by Rhys Williams.

Jurgen Klopp said after the match that Matip didn’t look “too good” after he came off injured. He felt something in his ‘adductor’ and could be out for a while.

Carragher has suggested that Liverpool need to sign a rcentre-back in January as the defensive injury crisis could cost them the Premier League title.

“It’s a massive worry but it’s not a new worry. Joel Matip will not play every game between now and the end of the season,” said Carragher to Sky Sports.

“I still believe Liverpool are the best team in this league, even without Van Dijk, and I think most people would say they’re favourites to win the league.

“I think the only way they don’t win it is if they have problems at centre-back where Rhys Williams or Nat Phillips have to play for a prolonged period of time.”

"At this moment, Liverpool Football Club have got one senior centre-back available." 😳@Carra23 insists it is 'paramount' for the Premier League champions to sign a defender in the January transfer window as their injury crisis continues. ✍️ pic.twitter.com/NFDS61MvTm

Both Virgil van Dijk and Joe Gomez are long-term absentees for the Reds.

Matip has been the only regular centre-back for the club, while defensive-midfielder Fabinho has been used in defence.

Youngster Rhys Williams and Nathaniel Phillips have done well for the Reds, but Carragher feels that they are bound to make mistakes (mainly because of lack of experience) if they continue to play for a prolonged period of time this season.

James Pearce of The Athletic claimed recently that Liverpool aren’t keen to do business in January, but the injury of Matip could force them to rethink their strategies.