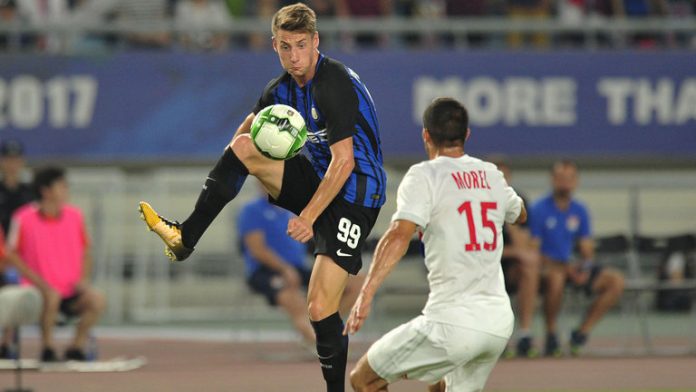 Andrea Pinamonti appears ready to leave Inter Milan after it was revealed that he has appointed Mino Raiola as his agent.

Pinamonti was linked with a number of top clubs in January including Liverpool after making his debut in the Europa League last December.

Tottenham, Arsenal and Chelsea have also monitored his progress, while Wolves are also believed to be in the running.

The 19-year-old is rated as one of the hottest talents in Italian football at the moment with a prolific scoring record for Inter at youth levels.

His decision to be represented by Raiola is significant as it comes just weeks after a proposed move to Udinese fell through.

He made his senior debut for Inter in the Europa League against Sparta Prague in December 2016.

The striker made his first appearance in Serie A the following February in a 2-0 home victory over Empoli.

In the 2017/18 season he became a member of the first team squad, but he continued to play with Inter’s U19 team in the UEFA Youth League.

Pinamonti was selected in the Italy team for the 2016 European U17 Championship where he scored one goal.