In French they would say: “Sortie par la petite porte” (exit through the small door). The hypothetical Grande Inter who has been utterly dominating the Serie A for the past 3 seasons will, for another year, remain but only a mirage in European context: an unachieved dream which the millions of Nerazzurri fans will look at nostalgically from afar, as they enjoy the success of yet another domestic league Scudetto at the end of the year. Wondering: what could have been…

Today, Inter Milan were simply insufficient. Insufficient to overturn a two-goal deficit from the first leg, insufficient (for their most important match of the year) at maintaining the entirety of their troops focused, insufficient at challenging the Reds of Liverpool. Inter manager Roberto Mancini had said this needed to be a “perfect night” and frankly, had the Nerazzurri capitalized on a few of their enormous first half chances, it might very well have been. In the end however, the goal by Fernando Torres brought an end to the Italian dreams of perfection, and together with the card shown to Nicolas Burdisso, contributed in painting this Milan night with colours of very bright Red.
.

Tactically, compared to Italian & English press common expectations the day preceding the match, both Rafael Benitez and Roberto Mancini left very in the way of surprises. With Steve Finnan out of action, the Reds manager was forced to shift Jamie Carragher to right-back position and insert Slovakian center-back Martin Skrtel beside Sami HyypiÃ¤. Fabio Aurelio won the race with John Arne Riise for a left-back spot, while Javier Mascherano and Lucas Leiva were confirmed as the two-man defensive midfield.

This time however, unlike the first leg at Anfield road the pair would have lot more work to cover, on account of Dejan Stankovic‘s advanced position at the heart of the Inter midfield. That was Mancini’s main modification to commonly employed tactics tonight, alongside perhaps the use of Cristian Chivu in center defense and Nicolas Burdisso on the wing (positions usually switched around in the domestic league).

With a sold out San Siro stadium litterally painted in Black and Blue, the atmosphere and tension in the ‘Temple of Italian Football’ were at their peak tonight. Inter Milan needed goals, and they needed them fast: the main course on the menu tonight was attack & assault, assault & attack. A man of Javier Zanetti‘s experience understood this perfectly, and exemplified Inter’s offensive spirit by leading his troops’ assault on the Reds Army. However, even the best of intentions are sometimes insufficient, when you’re left to face with Liverpool’s attentive defensive organization.

After 8 minutes, Julio Cruz started working his magic, and began a long-range battle with Liverpool’s nº1 Pepe Reina. The Spanish keeper was skillful at first (deflected shot), lucky later (diagonal shot wide, with Stankovic completely unmarked in the center), a mix of both in the end (block on Cruz’s short-range backheel attempt). After the first 45, the best of chances had gone to Inter’s favor, although Liverpool had not simply sat back and watched. Babel and Kuyt were multiplying their wing runs, trying to create space in front for Fernando Torres and the overlaps of Steven Gerrard, and it was precisely the tall blonde Dutchman’s efforts which produced the Reds’ biggest opportunities in the first half. Fortunately for Inter, his accuracy close to goal left a little to be desired. 0-0 at the the break.

Now, at the start of the night, Inter’s mission was not an easy one: they needed to score two goals without conceding any, and when you’re left facing a team of Liverpool’s caliber, you will need the strength of every man you can get. The mission turned from difficult to impossible however, the minute Nicolas Burdisso earned his second yellow of the night. In a season which will probably go down the history books (for Inter’s highest number of red cards during the year), I find it truly astonishing for a team with Scudetto and Champions League ambitions to be uncapable of finishing their matches with 11 players.

With that said, for the 10 minutes following their 1-man disadvantage, Inter played considerably well and could have even opened the score in minute 58, as Skrtel gifted the ball to Ibrahimovic on the edge of the box, leaving the Swedish striker in a one-on-one situation against Pepe Reina. Incredibly however, Zlatan put the ball wide and that was effectively the end of Inter’s night.

Just 5 minutes later, a lost ball by Maicon on Liverpool’s left wing enabled the Reds to go for the counter, serve Fernando Torres on the edge of the box, and leave the rest to the Spaniard: control, turn-around, shot, goal. Textbook finishing. 1-0 Liverpool.

With his team’s morale shattered, Mancini proceeded to make the few (unnecessary at this point) substitutions of the night, giving some playing time to Pelé (for Vieira) and Suazo (for Ibrahimovic). Before the Swede exited the field, he had yet another opportunity to score at least the consolation goal, when a great Chivu through-ball left him with space on the left side of the Liverpool. Alas much like the rest of his shooting attempts and free-kicks tonight, Zlatan’s shot was high and wide.

The match thus ended with tears and shaking heads among Nerazzurri ranks, in a night which saw Liverpool’s 3-0 aggregate win take them to the UEFA Champions League Quarter-Finals, and make this year’s Premier League’s domination in top-flight European football complete (in addition to Liverpool, England counts Chelsea, Arsenal, and Manchester United still in contention). 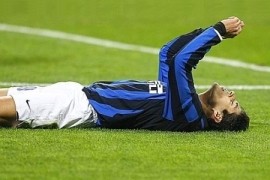 In the end, the nicest scene of the night came from the Giuseppe Meazza stands. During their post-match celebrations, the Liverpool fans interrupted their ‘You’ll Never Walk Alone‘ chants and began shouting ‘Inter! Inter‘ to pay respects to their Serie A opponents. The surrounding tens of thousands of Nerazzurri supporters, some holding their tears, responded in unison. A nice touch in a night of European football, where fair play and healthy competitive spirit should remain the hallmarks of the beautiful game. But a rather slim consolation for Inter fans…

I guess I would be remiss if I didn’t mention Roberto Mancini’s post-match declarations, in which the Inter coach announced he would be leaving the team at the end of the year. To my mind, that is evidently the heated reaction of a very disappointed manager, and should be taken with a very large grain of salt. With that said, the Italian press is already having a ball with hypotheses of possible replacements. Names mentioned so far? Cesare Prandelli, Rafael Benitez, and a certain… José Mourinho.