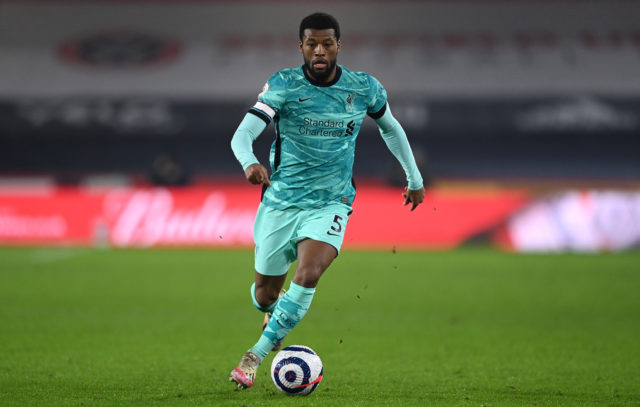 Gary Neville has claimed on Twitter that Liverpool midfielder Gini Wijnaldum is the most underrated player in the Premier League.

Liverpool manager Jurgen Klopp claimed yesterday that the Dutch midfielder is the consistent performer for the Reds this season.

The 30-year-old has been ever-present for Liverpool in the Premier League this terms, scoring two goals.

Wijnaldum divides opinion among the fans. Many feel that he has regressed in recent years and have questioned his contribution – what he actually brings to the side apart from durability and sideways passing.

There is also a suggestion that Wijnaldum has started regularly this season because of Liverpool’s injury crisis. In a fully fit team, the likes of Jordan Henderson, Fabinho, Thiago and Naby Keita are probably ahead of him in the pecking order.

However, the fact remains that Klopp trusts him highly, and he has been the epitome of consistency. Very few players in the Premier League are as good as him in ball retention and that’s why he is so pivotal to Klopp’s system.

Wijnaldum’s future is ‘up in the air’ with his current deal set to expire in a few months’ time. He is currently free to talk to overseas clubs about a pre-contract agreement.

He is yet a sign a new deal at the club and it is looking increasingly likely that he will leave Anfield on a free transfer.

It has been claimed that the likes of Barcelona, Juventus, Paris Saint-Germain and Bayern Munich could make an attempt to sign him.

In other news, Paul Merson has suggested that Liverpool missing out on the top-four is simply unthinkable.