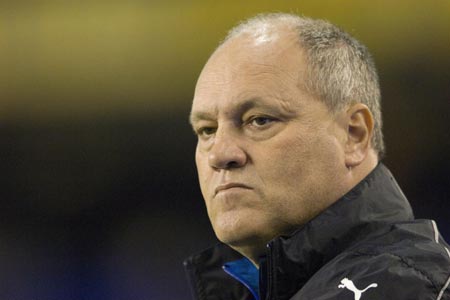 Tottenham Hotspur travel across Londonto face Fulham in the Premier League on Sunday, but the Cottagers are not the only familiar face they will encounter. Former boss Martin Jol, faces the task of trying to keep Harry Redknapp’s  free flowing Spurs team in check.

Just over 4 years ago as Spurs faced Getafe in a UEFA Cup tie; news of Martin Jol’s sacking spread like wildfire during the halftime break. The Dutch man, who had led Spurs to their two best finishes in 16 years, was deemed not good enough to take Spurs to the next level.

There is no doubt that this swift and brutal sacking by Chairman Daniel Levy, stalled Tottenham’s progress. Spurs under Jol’s stewardship were one lasagna meal away from the Champions League; instead that honour fell to Arsenal whose dominion over Spurs continued and only seems likely to end this year.

Before Jol took over the helm at Spurs, the North London club had endured over a decade of Premier League mediocrity. The previous incumbents of his position had signed mature or sub standard players in search of the Premier League Pound. Christian Gross, George Graham and Glen Hoddle had built teams which, when compared to their London neighbours, paled into insignificance.

Initially appointed as the right hand man to former French national manager Jacques Santini, Jol took sole charge only 13 games into Santini’s reign. The French man walked away citing personal reasons, but rumours spread it was due to a falling out with then Sporting Director Frank Arnesen, over the signing of Michael Carrick.

Under Jol Spurs ditched the “parking the bus” strategy that had earned them a point against Jose Mourinho’s Chelsea, and instead went in search of attacking football. Through good combinations in midfield and attack Tottenham started to live up to self acclaimed title of a good footballing team.

As manager, Jol built an incredible rapport with the Spurs faithful. His honest post match comments and a touch line confrontation with Arsenal boss, Arsene Wenger, helped win the hearts of the Spurs faithful. The Dutchman’s reputation was further enhanced by strong performances against the top teams, culminating in breakingChelsea’s 16 year jinx over Tottenham.

However, after suffering a mixed start to the 2007-2008 campaign, Levy’s head was turned. The Spurs board actively started sounding out Sevilla manager, Juande Ramos, who on the way to winning the 2007 UEFA Cup, had knocked Spurs out at the Quarter final stage. The writing was on the wall when club secretary John Alexander and Director Paul Kemsley were spotted meeting Ramos at a hotel in Seville.

Jol who has since coached Hamburg and AFC Ajax with some success, will claim not be seeking revenge this Sunday, but he will be determined to remind Spurs that he was the man who laid the foundations from which the current team shines.

The former West Brom and Coventry player has enjoyed a mixed start to his Fulham career. The Cottagers have made good progress in the Europa League; but their Premier League form has been suffering as a result. Fulham have collected 10 points with only 2 wins from the first 10 games.

The biggest issue for Jol is freshening up an ageing squad with relatively little money. Fulham’s best players are now all into their thirties and his big money signing Bryan Ruiz, has only scored one goal for the Cottagers.

Jol’s former club looks likely to have current supremo missing from the touchline on Sunday. Redknapp who didn’t travel to Russia for Tottenham’s Europa League defeat, is still recovering from a minor heart operation. Kevin Bond and Joe Jordan will be at the helm hoping to continue their impressive Premier League form. The north London club has taken 19 points from a possible 21 and is playing some vibrant attacking football.

Spurs were impressive last Sunday at home against QPR last Sunday, and I expect them to keep the same five man midfield behind Emmanuel Adebayor. One player who has come back into the team and has made an immediate difference is Aaron Lennon. The winger gives Spurs a natural balance and is better equipped to cover the rampaging Kyle Walker than Luka Modric.

Spurs enter this game as favourites, but they must be wary of Moussa Dembele’s unpredictability and Clint Dempsey late surges into the box. Tottenham will do well to remember the 4-0 hiding they suffered in the FA Cup at Craven Cottage last season.