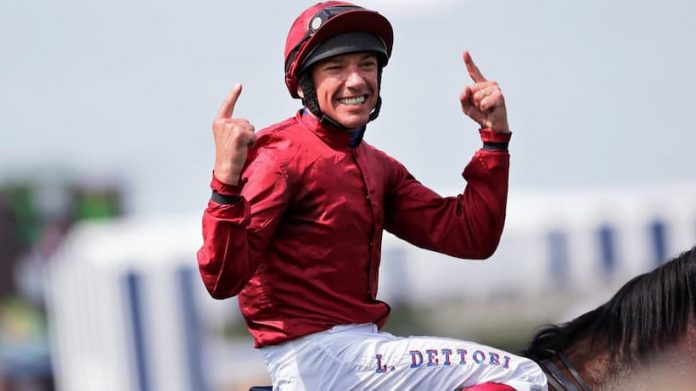 Frankie Dettori has been grabbing the headlines over the last few weeks – not due to any big race wins – but after his association with his main stable – John and Thady Gosden – has be put on pause.

Both Dettori and Gosden agreed that the pocket Italian will take a sabbatical from riding for the yard, so in the meantime Frankie’s riding career is somewhat in limbo. However, the good news for ‘Frankie Fans’ is that he’ll be in action today (Sunday 3rd July) at Hamburg racecourse in the German Derby.

The German Derby was won by Frankie Dettori back in 1991 on the Bruno Schutz-trained Temporal, but that’s been his only win in this Group One over the years.

Dettori will be trying to add a second German Derby win to his CV this Sunday though as he’s been booked to ride the Karkus Klug-trained – SO MOONSTUCK @ 3/1 with Betfred.- who many bookmakers have in as the 2022 German Derby favourite.

So Moonstuck was last seen running second at Cologne racecourse over 1m3f – beaten only a head – but with that just his third career run there is every chance there will be a lot more to come from this 3 year-old – we could be seeing a famous Frankie ‘flying dismount’ at Hamburg this Sunday.

Dettori also rides for Klug in the Group 3 Mehl Mulhens-Trophy (12.30).

Trainer – Markus Klug – also knows what it takes to land the German Derby – he’s saddled the winner three times since 2014, with the most recent in 2018 with Weltstar.

Frankie told the Racing Post “If you don’t see me ride domestically it’s not because I gave up, it’s because I’m riding abroad,” he said. “But I’m intending to ride all of this year and definitely next year.”

Frankie proved his critics wrong last weekend – just a day after the news broke of his potential split with Gosden – by riding a winner with his only mount – Lezoo – for trainer Ralph Beckett at Newmarket, but since then hasn’t ridden in the UK.

Frankie Dettori is not the only UK-based jockey making the trip to Germany this Sunday. The popular Hollie Doyle has also bagged a ride in the German Derby as she rides one of the other Markus Klug runners – Wagnis @ 8/1 with Betfred.

This 3 year-old filly has won her last two races, including an easy 5 length success at Hoppegarten last time out in a Group Three contest and will get a handy 3lbs fillies’ allowance from the colts too.

Other UK jockeys – Jack Mitchell (Dapango) and Richard Kingscote (Mylady) are also in action in the German Derby.