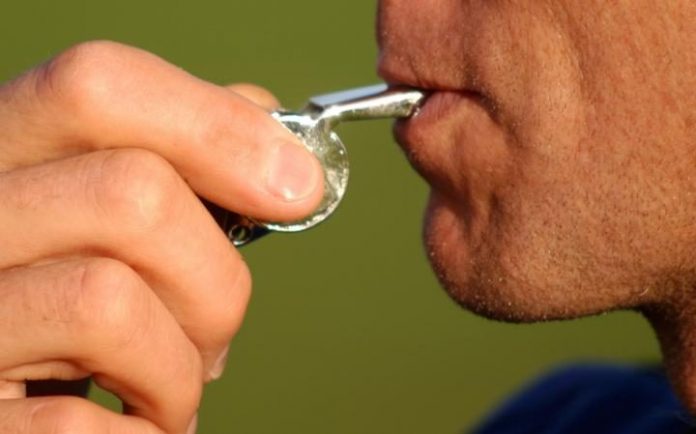 Referees in professional sports are usually the scapegoats when things go wrong because the decisions that they make have an impact on the result of the games that they officiate. As a matter of fact, referees have such an impact on games that online sportsbook soccer odds for teams change depending on the person officiating the game.

Referees in England are apparently tired of being blamed for things they do not have any control over and are appealing to the English Football Association to consider allowing them to use video cameras during grassroot games.

While other sports have been using instant replay to reduce the amount of human error that goes on during games, soccer referees want to use video cameras to record what happens on the pitch during games.

There has been an epidemic of referee abuse in soccer for some time and the referees want to use the video cameras to fight back. In 2009, Clive Steward, who had been officiating matches for 30 years, was attacked after officiating an under-13 match. Steward believes having a camera would have served as a deterrent and could have prevented his attackers from assaulting him.

The video cameras that the referees have in mind are similar to the body cams used by law enforcement officials. The cameras are about the same size as a mobile phone and they can be easily attached to the front of their uniform without obstructing the officials.

Mike Cairns, who spent 15 years officiating games in the Premier League before returning to the grassroots said he feels the video cameras would be a major step forward. Cairns said allowing refs to wear video cameras during games is an excellent idea because it allows them to provide evidence whenever they have to explain what happened during a game.

Cairns also believes that the players and team officials will be on their best behavior if they know the referee is recording them. In the interview, Cairns also said he would be happy to be one of the volunteers that take part in the trial runs.

Earlier this year, Cairns submitted his match notebook and other evidence to the Somerset FA to support his claim of verbal abuse during a game he officiated. The player’s appeal was upheld after he told the FA that his comments were aimed at his manager.

Cairns, along with other referees said it is difficult to get witnesses to come forward in most of the abuse cases and feels being able to use a camera will make it easier for referees to prove their abuse cases.

England’s former head of refereeing Keith Hackett said that the body cameras could also be useful in training referees, which would improve officiating.

While referees are excited about the potential of being able to wear cameras during game, the biggest obstacle they currently face is the expenses associated with it. Right now, body cameras are expensive, fortunately, due to technological advancements, the cameras will soon be cheaper.

Once the price of the cameras drop, referees believe the FA will seriously consider making them available to referees because the FA has been trying to eliminate referee abuse for the past decade and the cameras will definitely help their cause.