Football must be a pretty good way to advertise your company. We all know that Emirates sponsor Arsenal, AIG sponsor Manchester United, Samsung at Chelsea and Carlsberg at Liverpool. But did you know that Beko sponsor Watford or Fraser Eagle sponsor Accrington Stanley? Just how much money is to be made by sponsoring or advertising a team outside the top four?

With so much money in the game at this time in England, and almost all of it in the Premier League (with the exception of Queens Park Rangers), companies are falling over themselves to jump on the bandwagon and advertise their products and services through the game. They must think it is worth it because they are spending vast amounts of money in the process.

I thought it would be worth looking at the different ways companies can advertise with clubs, the cost of doing so and just what they might expect for their money: 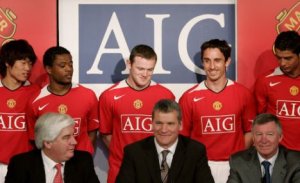 The four-year agreement has also been heralded, by extension, as the largest sponsorship deal in British history, eclipsing Chelsea‘s deal with Samsung. 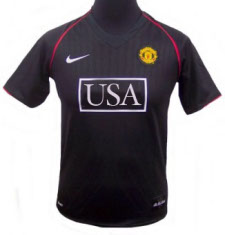 So… do these companies get their money’s worth?

Well, back in 2004, the club was able to report an operating profit of £58.3m ($105m) – not including the cost of player transfers – thanks to strong sales of replica shirts and other merchandise. It is believed that the club has 75 million fans worldwide, with 23 million in Europe, 4.6 million in the Americas, 40.7 million in Asia, and a further 5.9 million in South Africa. That’s an awful lot of people relating to AIG.

Just consider that every person in the world who wears one of United’s famous old shirts is advertising the company. Imagine if Soccerlens could sponsor Manchester United. How many people would visit this website if they did? The return must outweigh the cost.

Another very famous sponsorship deal was the £100m sponsorship of Arsenal by The Emirates. The stadium is named after its sponsors, the airline company Emirates, with whom the club signed the largest sponsorship deal in English football history. Arsenal fans try to ignore the deal and refer to the ground as Ashburton Grove, or the Grove, as they do not agree with corporate sponsorship of stadium names. Of course, everyone else in the world refers to the ground as The Emirates, so it really doesn’t make much difference.

The stadium will be officially known as Emirates Stadium until at least 2012, and the airline will be the club’s shirt sponsor until the end of the 2013—14 season.

The fact is, of course, that if it wasn’t for the money coming in from The Emirates, Arsene Wenger wouldn’t be able to spend huge amounts of money on transfer fees for experienced quality international players to come to Arsenal. Mmm….

In relation to The Emirates sponsorship of Arsenal, did you know that Etihad airways are associated with Chelsea? According to the Chelsea website, they are the national airline of the United Arab Emirates, based in Abu Dhabi. Do you think that Abu Dhabi United at Manchester City know about this?

With Manchester United going American for their official beer, you might think that Chelsea would have Baltika or Stary Melnik, but no, they have Heineken!

So what are the different ways of advertising with, or sponsoring, a football club? 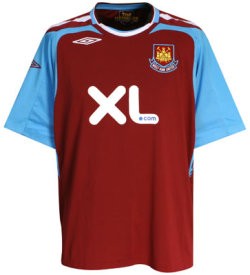 Well, you could be the main shirt sponsor of a club like AIG or Samsung. It shouldn’t prove too expensive. The XL group sponsor West Ham‘s shirt for just £2.5m a year. That’s a bargain in anyone’s book. Come on Ahmed, why aren’t Soccerlens sponsoring a Premier League club’s shirt?

What else can you sponsor? Well you can sponsor the matchday experience at your favourite club. For your money you will get advertising in the matchday programme, on the scoreboard and over the tannoy. You are likely to get a pre-match meal, half-time refreshments and after-match drinks. You could meet some of the players and maybe even choose the man of the match. It will cost you, but business-wise and personally, it could be worth it.

For these privileges you have to pay a fair amount of money. At Manchester City it would cost you £8,000. They need the money, don’t they. At newly promoted Stoke City you can get a similar package for just £2,000. That is less than you would pay at Championship side Watford, where it would set your company back £3,000.

In League Two you still have to part with significant funds. Bournemouth are struggling with a points deduction after they went into receivership last season. To sponsor a match day at their humble ground will set you back £1,495. You won’t get worldwide publicity and only three or four thousand people will be at the game rather than fifty thousand, but is it still worth it for a local business?

For just £35 you can sponsor a matchday at the club I coach at, Wilton Town. Ahmed? 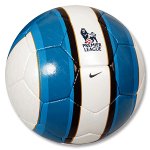 If matchday sponsorship is a bit rich for your tastes then maybe you could consider sponsoring the match ball. Manchester City will take £2,250 from you for the privilege, but that will come in handy for their new owners. Stoke City charge a little less at £1,500, whereas Bournemouth or Aldershot in League Two will only request £550 for the honour of having your company name on the scoreboard and in the programme.

Another way of helping your club and advertising your business is to sponsor an individual player’s kit. Premier League Bolton Wanderers will charge you £1,000 for one of their players whilst Stoke City will entertain you for as little as £400. Championship high-flyers Wolves are already looking for £726 whilst struggling Bournemouth can’t give a kit away for £375.

Straight advertising can be undertaken in a few ways, for example, over the tannoy system at the games or on the scoreboard, but the most traditional ways are to advertise in the matchday programme or to purchase an advertising board around the side of the pitch.

Prices for a programme advert vary from as little as £250 at Premier League Stoke City to as much as £6,500 for a whole page full season advert in the programme at Watford. At my Wilton Town you can get an advert for just £50.

The pitch side advertising boards vary enormously in price depending on where they are located in the ground. Are they pitch facing or crowd facing, and more importantly, will they be in the line of the cameras if the match is televised?

And then there are opportunities to advertise football club merchandise such as memorabilia, football training kits, pre-season tours and of course, football club websites.

So as you can see, you can get involved with a football club in terms of advertising for anywhere between ~£100m and £50. One can only assume that the big companies make money out of what they do as they wouldn’t do it for nothing. At the smaller clubs it may not be a major money spinner for the companies who sponsor and advertise, but it might make some money and you have the joy of knowing that you are helping your beloved club.