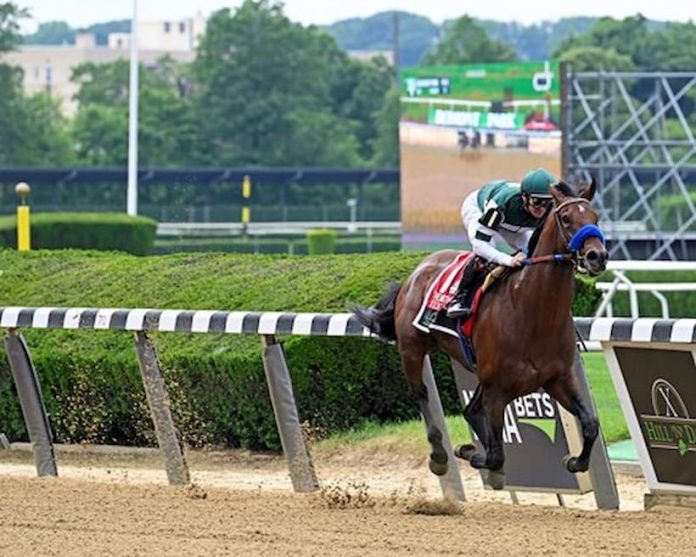 FLIGHTLINE, the next big US wonder horse in the making, further enhanced his growing reputation with a facile win in the Grade 1 TVG Pacific Classic at Del Mar – winning by an incredible 19 1/4 lengths!

He also had this season’s Dubai World Cup winner, Country Grammer, toiling in behind that day, so it’s fair to say the form looks rock-solid. But, just how good was that run, how does Flightline rate against some of the greats and where does he sit with the other big talking horse at the moment – Baaeed?

You can bet on the Grade I Breeders’ Cup Classic with BOVADA and receive a 75% CRYPTO welcome bonus (up to $750) to use on the race.

Flightline’s latest romp came on the TVG Pacific Classic at Del Mar on Saturday September 3 (watch below). He was taking on the 2022 Dubai World Cup Country Grammer that day but had no problem seeing off the Bob Baffert-trained 5 year-old by a staggering 19 1/4 lengths!

That last win made it 5-from-5 for Flightline and he’s now won those races by a total of approx 63 lengths – and no horse has even been closer than 6 lengths to Flightline at the line (so far).

Flightline Was Fast In The Pacific Classic – But How Fast?

The winning time Flightline posted in the 2022 Pacific Classic was 1m.59.28 secs. It was also the first time Flightline was running around two turns (1m2f) – he finished the final quarter mile in a time of 24.81 seconds, with the last half mile at 49.31 seconds.

Flightline’s time in the Pacific Classic (1m.59.28 secs) was only just outside the Del Mar track record of 1m59.11 secs, which was set by Candy Ride in the 2003 renewal of the same race.

This quick time at the end of the Pacific Classic further backs-up Flightline’s class – most decent horses can run quick times during the first part of their races, but the exceptional ones can also record speedy figures during the final stages of their races – these are normally the ones that turn out to be the greats!

How Good Is Flightline Compared To Other Great Racehorses?

Many are already comparing Flightline to superstars of the past like Ghostzapper and Arrogate, plus even the unique talent that was Secretariat, who won the 1973 US Triple Crown.

Flightline is certainly on the right path to be mixing it with those kind of names, but his performance in the Breeders’ Cup Classic on Nov 5 at Keeneland, will further cement these claims.

The John Sadler-trained colt earned a 126 Beyer Speed Figure after his Pacific Classic win – the highest since Ghostzapper’s 128 (2004). While Timeform US slapped a figure of 152 on Flightline, which was the highest in the last decade by a staggering 10 points – dwarfing Gun Runners 142 that he got for landing the Woodward Stakes in 2017.

Equibase Speed Figures posted a mark of 122, while Timeform in Europe gave Flightline a rating of 143 – which is 6 points higher than the other big talking horse still in training – Baaeed, who is also unbeaten (10-from-10) in his races.

Flightline Still Behind Some Greats Though

Flightline hasn’t conquered the horse racng world just yet – yes, he’s got a lofty mark and with plenty of racing still to come he could improve his ratings further.

That said, he’s the only dirt horse in the top five Timefore Europe list and still has names like Ribot and Mill Reef behind him!

So, after winning the Pacific Classic recently that race also had a Breeders’ Cup ‘Win and You’re In’ bonus attached to it, which means Flightline’s connections get a free ticket to Keeneland on Nov 5.

The Breeders’ Cup Classic will be the likely target for Flightline, which is another race over the 1m2f trip that he tackled last time.

Other notable runners that could run in the Breeders’ Cup Classic on Nov 5 are Kentucky Derby runner-up and Travers Stakes winner Epicenter and Life Is Good, who was last seen winning the Whitney Stakes at Saratoga on Aug 6.

When Is The 2022 Breeders’ Cup Classic Stakes?

Run over a trip of 1m2f (10 furlongs), the Grade I Breeders’ Cup will be staged at Keeneland racetrack in 2022.

Flightline heads the betting at 2-3, which means the bookies with the horse a 60% chance of winning the Breeders’ Cup Classic 2022.

Others on request – All odds correct as of 05:24 on Weds 7 Sept and subject to change

Flightline Career In Numbers and Profile

What Did Flightline’s Connections Say?

“I was just trying not to start crying so hard that I wouldn’t be able to see him when he came across the finish line,” Said Flightline’s winning breeder Jane Lyon.

John W. Sadler added “This horse is so brilliant you have to space his races a little bit apart because he is his own category,”

“I know him well, and I know what’s best for him is to build up his energy between one race to the next. We’d all want to see him run more times but when he runs like this you don’t need to run him more times. Enjoy the ones you run in.”