The Soccerlens All-Stars finished fourth in week one of the Soccerlens Fantasy Football Game. I don’t want to point fingers, but if I did I’d be pointing at least one digit directly at Pepe Reina. If he’d held on to the ball I would have finished in the top three. But he didn’t.

No matter, because last week I played at Practice level. So there was no money at stake. This week I’m stepping up to Silver level, where I’ve paid $4.99 to enter and will win a cash prize of $25 for finishing first, $10 for finishing second and $5 for finishing third in my 11 team league. In this series of fantasy football posts, I’m going to be keeping track of how much money I’ve won or lost, so the pressure is on.

My first big decision is that I’ve stuck with Pepe Reina. I’m treating his failed football grab against Arsenal as a freak occurrence and trusting him with the gloves again this week. My only two changes are as follows:

1. Jody Craddock out, Gareth Bale in. Craddock had been included because I’m a Wolves fan and so wanted a Wolves player in my team, and also because Craddock had somehow managed five goals this season. However, one look at Gareth Bale tearing down Spurs’ left flank last Saturday was enough to convince me that Bale being listed as a defender but actually playing left wing is too good an opportunity to turn down. As a defender, Bale’s goals will be worth five points each, but he’ll also earn points for any Spurs clean sheets too. Welcome to the Soccerlens All-Stars Gareth.

2. Bobby Zamora out, Stephen Ireland in. I like Bobby Z. I really do. But he failed to score last week, and also picked up a booking, which meant he only collected one point in total. This week Fulham play Manchester United, so basically I don’t fancy his chances. Instead, I’m taking a gamble on new Aston Villa signing Stephen Ireland. My thinking is that even though Ireland hasn’t played much lately, he’ll be pumped up for his Aston Villa debut, determined to send the message that Man City should have kept him. I think he’s going to score for Villa against Newcastle.

Those two changes mean a switch to 4-4-2, and so my team now looks like this: 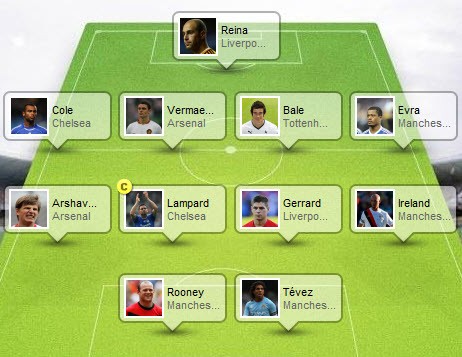 (Frank Lampard retains the captain’s armband not because of any leadership qualities, but because captains score double points and Chelsea are playing Wigan.)

Think you can pick a better team? Sign up for the Soccerlens Fantasy Football Game and prove it. You can also win some money. I’m playing the Silver level, where you pay $4.99 to enter and there are $40 of cash prizes available. The Gold level entrance fee is $9.99 with $80 of cash prizes, while the Platinum level is $24.99 with $200 of cash prizes. You have until two hours before the Premier League games kickoff this weekend to enter.