Fantasy football gameweek 16 is almost upon us, with hundreds of eager new managers joining MondoGoal.com for a crack at their unique ‘season in a day’ make-up; winning cash, beating friends, and achieving absolute glory in only one match day.

Making things all the more exciting for footy fans everywhere is the prospect of Manchester United vs Liverpool at Old Trafford on Sunday; and us at Soccerlens are wondering how brave fantasy managers will be when selecting their MondoGoal teams. Do you think United, with their great run of form, will get revenge on Brendan Rodgers’ beleaguered Reds, who crashed out of the Champions League at home to Basel midweek, for their 3-0 loss last season?

There will be those who avoid both sets of players entirely, with Chelsea’s home fixture to Hull and Manchester City’s visit to Leicester City sure to see a few blue attackers hit the fantasy lineups. But fortune favours the brave, and Soccerlens will be throwing caution to the wind this weekend, making sure we don’t miss out on some cracking points totals from some world class players in red.

We’re not alone, with former Liverpool midfielder Jason McAteer chucking in both Raheem Sterling and Jordan Henderson in his MondoGoal team, ready to do battle in his exclusive league this weekend. Make sure you enter McAteer’s competition, the winner will get their hands on a signed Liverpool 2014/15 shirt; even more incentive to take on the legend!

Check out our MondoGoal team for Game week 16; do you agree with the selections? 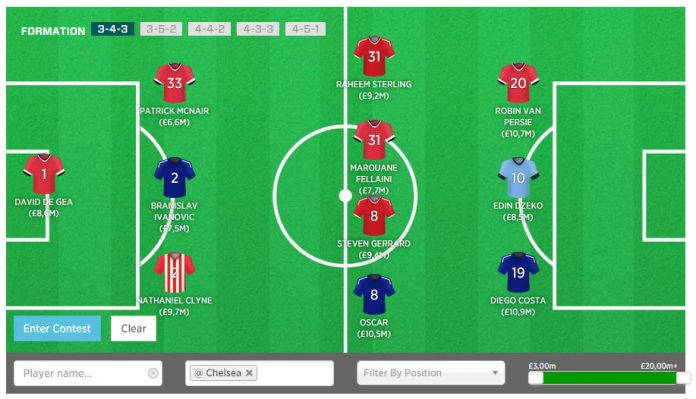 Straight in with a player from the huge Sunday clash, with Spaniard De Gea certainly one for the big occasion. We’re expecting an open game in Manchester, with De Gea sure to be tested with such a vulnerable defence in front of him. An outstanding keeper, and one that could be a matchwinner.

The England man has been in inspired form all season, benifiting from new manager Ronald Koeman’s emphasis on defensive structure and discipline. A trip to Burnley, who are languishing in the relegation zone, could yield yet another clean sheet for the high flying Saints.

Although apparently without his own Wikepedia page until very recently, the young United defender comes in as our cheap option at the back. With Liverpool struggling in all areas, and United enjoying a great run of form, don’t bet against McNair and co keeping them out.

The Chelsea man is a sure thing in our team this week, with Chelsea at home to the free-falling Hull City. Big Serb Branislav, who loves to push forward and join the attack, could easily nick a goal and a clean sheet.

While not playing in a team that is high on confidence, young Sterling remains Liverpool’s best attacking outlet. Quick, nimble and brave; if the 20-year-old can find that killer instinct in the final third that has been alluding him this season, he could fashion something unexpected in Manchester.

The man who could do no right last season at Old Trafford is fast becoming an integral part of Louis Van Gaal’s side, and with his relentlessly agressive style of play from the centre, and impressive heading ability, he might have what it takes to scare their bitter rivals home pointless.

The Liverpool captain will be on penalties at Old Trafford, as he was in the same fixture last year where he scored twice from the spot, and missed a third! Could he get another shot at the prize?

The spritely Brazilian will be charged with dictating the play in the absence of Cesc Fabregas, and with Hull leakier than a dancing sieve, we could be up for a goalfest at Stamford Bridge.

The Dutchman is starting to rediscover his form of old under Van Gaal, and is currently the likeliest to get on the scoresheet for his side. If Juan Mata and Wayne Rooney can find the hitman, he’ll do the rest.

Much to the dismay of us fantasy managers, its bye bye, Sergio for the next month or so. Serb Dzeko will surely be drafted in for the visit to Leicester on Saturday, and with the newly promoted side flailing down the bottom of the league, City may not even miss the superstar Argentine, with Dzeko a safe bet for a goal.

Although not at his best in recent weeks, the Spaniard is Chelsea’s number one striker by a mile, and will be in a ravenous mood at Stamford Bridge. Hull better watch out, the Guv’nor will be on the war path!

What do make of our team? Reckon you can do better?
Get signed up at MondoGoal.com and take your best shot!