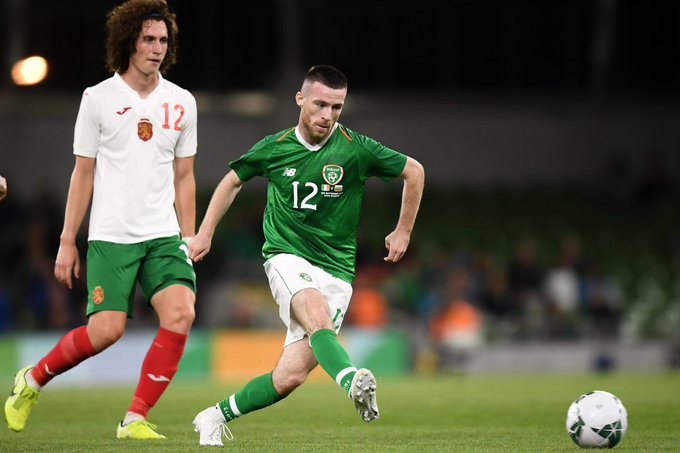 West Ham United midfielder Josh Cullen has produced an impressive performance on his debut for his country, and fans across the world are praising him.

The 23-year-old was handed his full Ireland debut by Mick McCarthy yesterday, and he produced a solid performance as Ireland won 3-1 against Bulgaria.

Cullen, who is currently playing for Charlton Athletic on loan from the Hammers, won the Man of the Match award for Ireland.

Both West Ham and Irish fans have taken to Twitter to express their reaction, and it has been very positive. Here are some of the selected tweets:

Jack Byrne and Josh Cullen the two standouts tonight. James Collins a handful and a decent option off the bench. A good win in the end but hard to see anyone really breaking into McCarthy’s seemingly settled XI ahead of next month’s qualifiers barring injury. #IrlBul

Josh Cullen 8/10 on his debut,take a bow son, has to be in for a shout against Georgia next month

Good night all round for Irish football. Brilliant 3-1 win for the u21s in Sweden and some impressive performances by some of the new players in the senior squad. Thought Josh Cullen was very good in CM.

Even though he only had fuck all minutes he was one of the best on the pitch, josh Cullen take a bow what a debut he had

Since making his debut in 2015, Cullen has hardly featured for the Hammers.

He enjoyed loan spells previously at Bradford City, Bolton Wanderers and Charlton, and will be away from the Hammers first-team squad this season as well.

However, Manuel Pellegrini will be pleased with his latest performance for Ireland. West Ham have enough quality players in midfield, and the likes of Mark Noble, Declan Rice and Jack Wilshere are ahead of him in the pecking order.

Cullen has proved that he is good enough at Championship level, and now he is showing his quality on the international stage as well.