Three points for Manchester United would move them into second place, at least ahead of Arsenal’s kick off against Chelsea following the action from Goodison Park.

Louis van Gaal’s side start the weekend having played one game more than the top two, and one more game than Liverpool in fifth position, but with a healthy eight point lead in the race of the UEFA Champions League places.

Everton have won three of their last four since being eliminated from the Europa League and a top half finish is well in sight for Roberto Martínez’s side.

Former Manchester United midfielder Darron Gibson is out but Romelu Lukaku should be back in action having played only 30 minutes in the last three games combined.

Three midfielders have knocks but are all expected to be ready should Martínez call upon them.

Marcos Rojo missed last weekend’s loss at Chelsea but could return to action this weekend. Jonny Evans is available again after suspension but Chris Smalling and Phil Jones are playing well together in the middle of defence.

Both Michael Carrick and Daley Blind were absent last weekend due to injuries and neither may be fit in time to play at Goodison Park.

Robin van Persie was an unused sub last weekend but could start for the first time since the 2-1 loss at Swansea City in February. 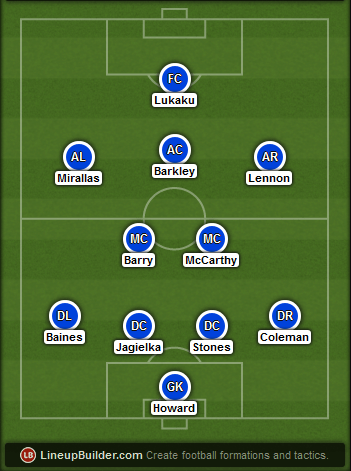 John Stones has replaced Sylain Distin since the start of the year as Phil Jagielka’s partner in the middle of defence. Aaron Lennon has been getting a good run out on the wing since joining on loan from Tottenham during the winter transfer window. Ross Barkley is back in his number 10 role and Romelu Lukaku should be back this weekend to start up front. 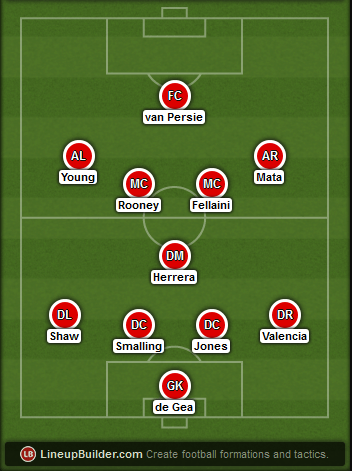 Louis van Gaal has a couple of knicks in defence but the same back four that faced Chelsea should be available again this weekend. Ander Herrera may have to continue sitting in front of them which may mean Wayne Rooney back in midfield like he was last weekend. However, Radamel Falcao started at Stamford Bridge, this weekend Robin van Persie may be fit enough to start.

Juan Mata vs Leighton Baines
Leighton Baines gets a lot of credit for his assists going forward but there are still question makes over the left-back’s defensive capabilities. Juan Mata is more than capable of exposing the England international and with the Spanish playmaker in good form of late we expect him to do just that. Look out for Mata to cut inside and pick out his teammates in and around the Everton penalty area, or even score another goal himself this weekend.

Robin van Persie vs Phil Jagielka
It’s been more than two months since Manchester United fans saw Robin van Persie and the Dutch striker is capable of making a goalscoring return this weekend. Whilst the Everton defence has tightened up in recent weeks, Manchester United have the quality to break them down as team’s were doing with relative ease earlier in the season. The Dutch striker will be supported by a number of playmakers, and Marouane Fellaini to knock down balls for him.

Ashley Young vs Séamus Coleman
Manchester United’s left winger has been pretty useful this season, albeit not involved in many goals at all. With Luke Shaw back in action and bombing on down the left flank we can see this duo causing real problems for the Everton defence which is the more experienced side. It wasn’t long ago that Séamus Coleman was conceding a cheap penalty and the Irish right-back has certainly been beaten by a number of wingers this season.

0 – Everton have not beaten a top six team all season and their recent win versus Southampton is their only win versus a current top nine side this season.

101 – Manchester United have only picked up more points versus Aston Villa (107) than they have against Everton in the history of the Premier League.

355 – Radamel Falcao has gone 355 minutes across eight games since his last shot on target versus Manchester United.