Manchester City travel to Goodison Park on Saturday sitting a relatively comfortable fourth in the Premier League table, seven points ahead of fifth-placed Liverpool with a game in hand and fourteen points ahead of their rivals (Everton are currently in seventh place on 48 points).

Man City are also buoyed by a run of three wins from their last four league encounters, including a 2-1 victory over basement side West Ham last week. The Everton away game comes 3 days before Manchester City host Tottenham at home on Tuesday, a match that would have a greater bearing on Tottenham’s European prospects than Manchester City’s. Even two back to back defeats would still leave Manchester City a point ahead of Tottenham and Liverpool.

Another piece of good news for Manchester City is that Carlos Tevez is winning his race to be fit for the FA Cup final next weekend, which means he might play a part in City’s matches as early as Everton’s game but most likely in the Tottenham game on Tuesday, with the final now being considered a realistic target to have him start the game.

Everton’s hopes of playing in Europe next season appear all but over, with a Europa League place beyond their reach. David Moyes’ men are currently seventh in the table and seven points adrift of Liverpool and Tottenham, sitting fifth and sixth respectively.

However, in what has been an impressive recovery by Everton after a horrible start to the season, Everton will be keen to hold on to seventh spot in the league and they have a solid home record this season which, statistically speaking, tips them as winners against Manchester City.

Mancini’s side will not want a repeat of the two sides’ showdown at Eastlands in December, when goals from Tim Cahill and youngster Leighton Baines left them empty-handed.

But City have not triumphed at Goodison since April 2009 – ending a winless streak there that stretched back to October 1992.

Soccerlens Prediction: A Manchester City win is on the cards, despite the stats predicting against it. Mancini has talked a lot about City needing to learn to win without Tevez and if they can keep Arteta, Cahill and Rodwell in check (and City’s three-man midfield is ideal for that), then they’ve got a good chance of coming away with a win. 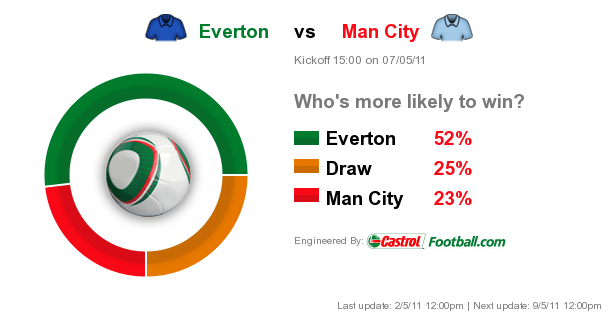