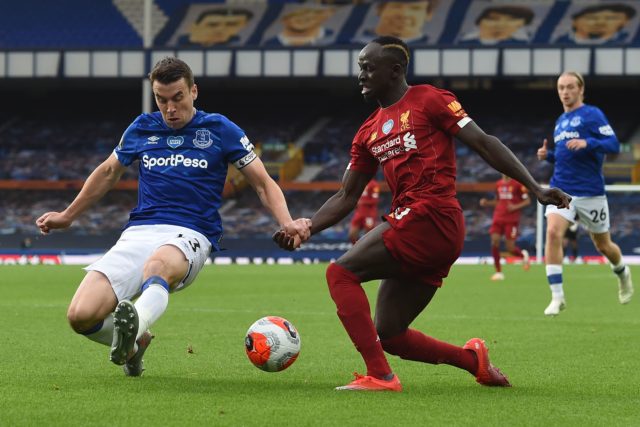 Everton managed a 0-0 draw against derby rivals Liverpool in the Premier League clash on Sunday afternoon at Goodison Park.

It wasn’t an exciting derby game as both sides looked very rusty. However, Everton nearly came to breaking the deadlock.

Although Liverpool dominated possession, Everton were superbly organised defensively. Seamus Coleman, the Everton skipper, was simply superb and he led by example.

Coleman, who is on £70k-per-week wages, has struggled to meet the high standards in the first half of the season. However, it seems like the break has helped him regain his best form once again.

Many Everton fans took to social networking site Twitter to express their reaction to Coleman’s performance after the match. Here are some of the selected tweets:

Seamus Coleman was excellent there. #EFC

Seamus Coleman was outstanding there. Led by example against the best player in the league. #EFC

Almost stole something there. Bad match, but Everton had good shape all game. Seamus Coleman wound back the years with that performance. #EFC

Coleman well deserved motm. Reminder of how good of a defensive full back he can be. #EFC

Man Of The Match Blues?? Got to go with Seamus Coleman myself, led by example and put in a quality performance! 🙌🏻💙 #EFC #COYB

Seamus Coleman on top form today. Led by example , never caught out of position, made crucial tackles, distributed the ball well, argued with Mike Dean + had little support from Iwobi. Good to have our captain back 👍#EFC #NSNO

Thought Seamus Coleman was exceptional there. Having Mane off for pace to recovery and tackle him. Love it. Onwards to Wednesday#UHTPodcast #EFC #COYB #Everton

The 31-year-old made four tackles, two interceptions, and three clearances during the game, according to whoscored.com.

Carlo Ancelotti has made a strong impact at Everton already, and the Toffees are expected to get better when the Italian has more of his own signings in the team.

Everton are the only Premier League side to remain unbeaten at home in 2020 in all competitions. They face Norwich City in the next Premier League game on Wednesday.