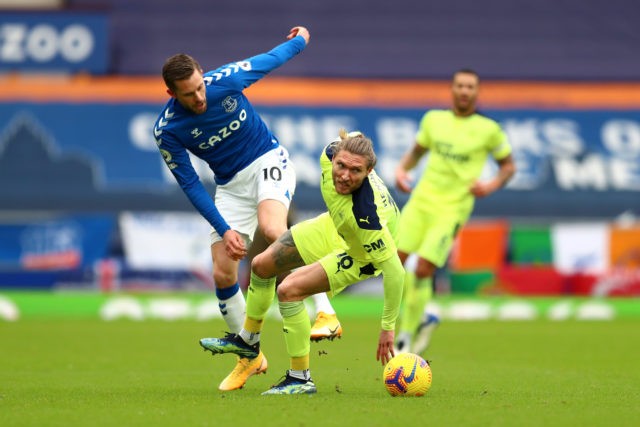 Everton suffered a surprise 2-0 defeat against Newcastle United at Goodison Park in the Premier League on Saturday.

Callum Wilson scored two goals in the second half to earn all three points for the Magpies. It was also Newcastle’s first win in their last 12 games in all competitions.

It was a lacklustre effort from Everton and many fans heavily criticised Gylfi Sigurdsson for yet another shocking performance.

The 31-year-old started in midfield alongside Abdoulaye Doucoure and played the full 90 minutes.

He attempted 54 passes, made two tackles and one interception during the game. However, he was largely anonymous and failed to influence the game from midfield.

Many Everton fans were left puzzled by Carlo Ancelotti’s decision to play him the entire game. Here are some of the selected tweets:

Absolutely. Should have been starting that game ahead of Sigurdsson, who should never ever start a game as a central midfielder!!!

Both spot on. Iwobi's bang on the head when he turned into a hard working footballer with a brain for a few weeks must have worn off. Absolute pants today. Sigurdsson was well erm…Sigurdsson. Can't wait for the Icelandic ghost to disappear for good.

A lack of spirit was cited as the reason we lost, which is worrying. Sigurdsson stated this week it’s the happiest he’s been at the club. It’s clear we still have passengers that are far too comfortable coasting through matches. Him being one of them.

Sigurdsson completely anonymous apart from giving a free kick away on the edge of the box. I wouldn't care if he never played for us again. Difficult to question Carlo but I'm afraid he got it wrong today. We need a striker in asap

Really painful this, how Sigurdsson is still on the pitch is beyond me.

He has a contract at the club until 2022, but the chances are slim that the Toffees will offer him a fresh deal to extend his stay.

The defeat is a blow to Everton’s European ambitions. They remain seventh in the league with 33 points, four points behind Liverpool.

However, the Toffees have a tough set of fixtures ahead of them in February, and they must pick up their form quickly.