England beat Estonia 3-0, Cole scoring the first after 36 minutes (Bridge-Crouch-Cole) and then Beckham providing two excellent crosses for Crouch and Owen to score in the second half.

David Beckham is back ladies and gentlemen, and he’s taking England to Euro 2008. So far, that is.

Goals and group standings after the jump.

Couldn’t resist this one: 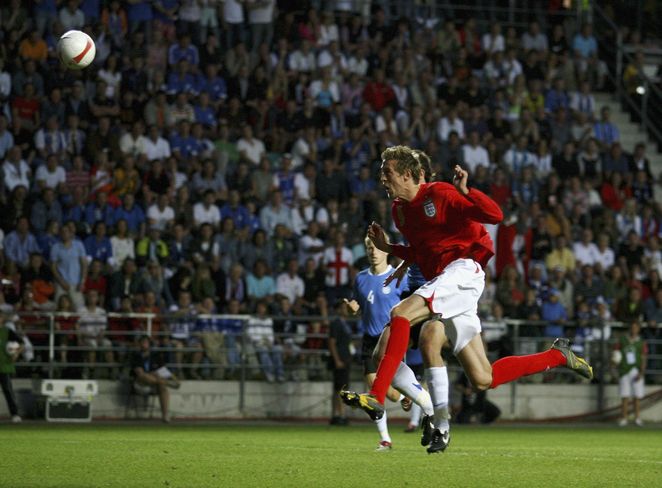 With Russia holding Croatia to a draw, England have some breathing room – wins against Croatia and Israel at Wembley will set them up nicely and after that it’s a matter of getting past Hiddink’s Russia.

England are too tense – they were tense before Andorra and as a result took 45 minutes to come to terms with the fact that they could sit back and pick the opposition apart by keeping the ball and passing it around.

Against Brazil, England fought like dogs but were still too tense – however, they will do better against Estonia for two reasons:

One, Crouch is starting instead of Smith, so you can expect some chances to land England’s way.

Two, Estonia are not Brazil, and as a result Gerrard will have more freedom to attack.

Can England lose this? That’s the question everyone’s asking now because the media has absolutely no faith in McClaren’s ability to lead England to a win. I prefer to put my faith in the players – Beckham and Gerrard can help England win, Crouch creates chances, Owen is due a goal and Joe Cole will relish the chance to run at the Estonian defense.

Who will start for England?

I’d like McClaren to play with Brown at right-back but he could go with Phil Neville or Carragher again. King and Terry in the center, Wayne Bridge as left back, with the midfield staying the same and Crouch replacing Smith up front.

Losing to Estonia will be disastrous – A win pulls them level with Israel on points and gives them a fighting chance of topping the group as long as they beat Russia, Israel and Croatia at home.

On the image used in this article, credit goes to the BBC for putting it up.