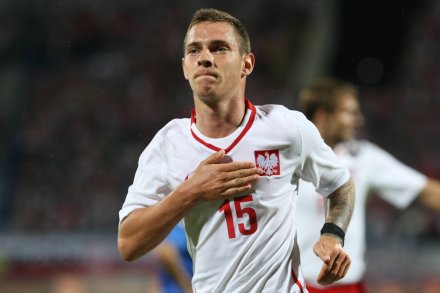 According to Castrol Edge Performance data, Ludovic Obraniak can provide the requisite creativity for Poland against England in the absence of injured captain Jacob Blaszczykowski, with the French-born schemer impressing in his season’s Ligue 1.

So far for Bordeaux this term, the diminutive Obraniak has created 16 goal-scoring chances for his team-mates, a figure bettered by only four other players. Those 16 chances include two assists while the former Lille man has also bagged two goals in his eight league games so far.

While team captain Blaszczykowski has already netted two goals for Poland in the FIFA WORLD CUP 2014™ qualifiers, both those goals came from the penalty spot, while Obraniak has already provided a goal assist and created two goal-scoring chances in his 72 minutes of action against Montenegro. Mobile and constantly on the move (see below) expect the Bordeaux schemer to provide even more of his side’s creative edge against England on the 16th.

Castrol Edge Performance Data shows that Wayne Rooney enjoyed his more advanced role for England against San Marino as he marked his first home international as captain with a richly-deserved brace.

The Manchester United star had been playing as a midfielder for his club in recent weeks as Red Devils’ manager Sir Alex Ferguson looked to bed the England man in alongside new signing Robin van Persie but was returned to his more natural striker role by England boss Roy Hodgson this week.

As such, Rooney had more chances and, remarkably, was able to net his first goals for club or country since Euro 2012.

Friday night also proved to be a significant personal night for Rooney. The England man’s double salvo took his total international goal haul to 31, ahead of Tom Finney, Nat Lofthouse and Alan Shearer (all 30). The Manchester United man will now surely have his eyes set on becoming the first England player to rack up half a century of international strikes.