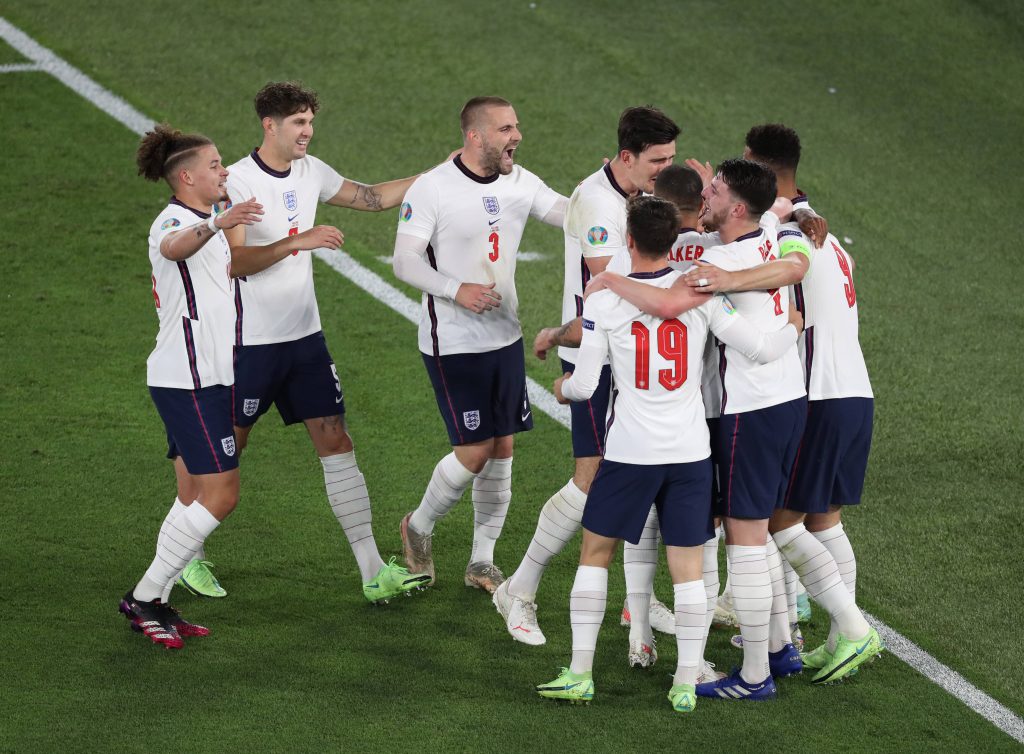 England hammered Ukraine 4-0 in Rome to reach the last four of a major tournament for the second campaign in a row, setting up a semi-final clash at Wembley Stadium against Denmark.

A brace from Harry Kane and headers from both Harry Maguire and Jordan Henderson sealed a resounding victory over the Ukrainians, while the Three Lions’ defence remains unbreached across all five games they have played at Euro 2020.

The tricky winger looked to have made an immediate impact as he went down in the box after just three minutes, but the penalty claims were waved away by German referee Felix Byrch.

Just 30 seconds later, the Three Lions made their presence felt and took the lead against an opponent that they have only ever lost once against.

Cutting back inside from the left wing, Raheem Sterling shaped to shoot but played an inch-perfect ball through to Kane and took the Ukraine defence out of the equation.

Having grabbed his first of the tournament against Germany earlier in the week, captain Kane wasn’t going to miss and poked home into the net past the onrushing goalkeeper Heorhiy Bushchan.

That goal settled England and had them firmly in the ascendancy, with Ukraine left shocked.

Andriy Shevchenko’s men had very few chances all evening, and when England ‘keeper Jordan Pickford tipped a tame shot from Roman Yaremchuk around the post on the 20-minute mark, his reaction said everything. He wasn’t prepared to let his teammates’ concentration levels dip and they responded well.

Maguire met an in-swinging free-kick from Shaw but headed over, and Declan Rice hit a rasping effort towards goal from the edge of the area, which Bushchan had to react quickly to palm away from danger.

Shaw was impressive all evening in Rome and before half-time, he set up Sancho in space in the box, but the chance went begging as a weak shot at goal was comfortably taken.

He had received the ball with another clever pass from Sterling similar to the one taken by Kane when scoring the opening goal.

Before half-time, England were given a minor wake-up call as Mykola Shaparenko dragged a shot narrowly wide of Pickford’s goal.

That came after some dogged defending in the box to prevent any close-range efforts, but nobody was marking Shaparenko as the ball fell to him.

Fortunately for the Three Lions, they avoided any punishment and half-time came around with Gareth Southgate’s men were 1-0 up at the break.

Whatever the England boss said at the interval in the dressing room certainly had an impact on his players as they came out for the second half firing on all cylinders, ready to put the game out of Ukraine’s reach for good, and did so just two minutes after the restart through Maguire.

Much like in the opening 45, Maguire was dominant in the air from set-pieces, but the difference was that this time around, the big centre-back made his mark when he rose highest to meet another of Shaw’s whipped deliveries into the box from the left.

Bushchan had absolutely no chance of saving it from close range, and the Three Lions had doubled their advantage.

If that goal had England with one foot in the semis, then Kane’s second of the night and their third just a few minutes later had both feet firmly planted in the last four.

A recurring theme at the Stadio Olimpico, Shaw found space on the left side of the box and took the ball from Sterling.

Another good cross followed to find Kane in space no more than eight yards out, and the talisman made it 3-0 with a strong header.

With that goal, Kane now has nine for England at major tournaments, having scored six at the 2018 World Cup and three so far in this Euro 2020 campaign.

That equals Alan Shearer, leaving the Tottenham Hotspur man joint-second in the list and just one behind the all-time leading goalscorer Gary Lineker on ten.

After the third goal, Southgate made his first substitution of the evening and brought on Henderson in place of Rice.

The West Ham United man was on the verge of a suspension had he picked up another booking, so a smart move by the boss.

That move was made even smarter with England’s fourth and final goal just after the hour-mark.

Once Kane had been denied his hat trick spectacularly by Buschan, tipping a volley around the post for a corner, Southgate’s change became even smarter as Henderson met Mason Mount’s corner in space at the front post to head home into the net and grab his first ever England goal on what was his 62nd appearance for the Three Lions.

That goal also provided England’s fourth of the evening and with it another good omen for the national team.

Only once before have the Three Lions scored four goals in a knockout game at a major tournament, that being in the 1966 World Cup final against Germany (4-2), and we all know what that victory meant.

In all honesty, there wasn’t much action at either end in the last half-an-hour. Changes were made by both sides, with England knowing that they had sealed a place in the last four and Ukraine wanting to give players minutes on the pitch before the full-time whistle, which they knew would signal the end of their Euro 2020 campaign.

Pickford did palm away a shot from one of the Ukraine substitutes – Yevhenii Makarenko – to make sure his clean sheet was sealed as well as the thumping victory, but that’s all.

Felix Byrch didn’t add any injury time at the end of the match and blew his whistle as the clock hit 90:00 to confirm England’s semi-final clash with Denmark on Wednesday back at Wembley.

It won’t be an easy game, that’s for sure, but the Three Lions can be proud of their victory in Rome and go into the last four tie with confidence behind them.