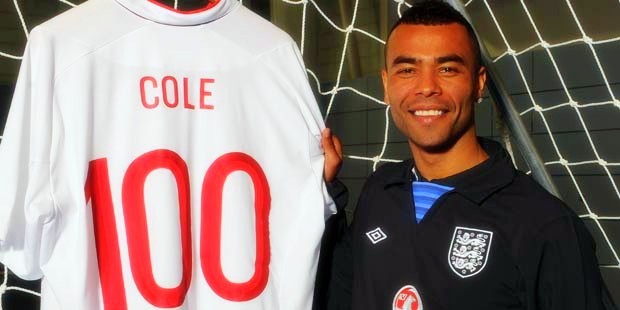 Representing your nation at any level is probably the best feeling one can ever bore in his heart. A sense of patriotism runs through the veins and the feelings cannot be expressed in any words or language.

It is even harder for the outsiders to fathom its true essence. When any person represent his nation for over a long period of time at the highest level, the status of a hero and legend is achieved.

Ashley Cole is one of such hero of the game for England. If he is selected for Wednesday’s friendly with Brazil at Wembley, he will earn his 100th cap for the nation. It is an unbelievable achievement and only six men before him have achieved that feat for England.

While England prepares for an international match for the first time in 2013, celebrating the Football Association’s 150th anniversary, what could the better occasion be than to remember all the players who have had served the nation and accomplished the magic feat of 100 caps in their life time.

The legendary England goal keeper has the distinction of holding the more caps than anyone else. In his glittering football career spanning over 30 years, he played for eleven different clubs.

It’s amazing that he didn’t make his World Cup debut till the age of 32, yet played in 17 finals matches sharing the record of keeping 10 clean sheets in World Cup finals jointly with French keeper Fabien Barthez.

His greatest international moment is arguably the two goals conceded against Argentina in the 1986 World Cup quarter finals.

Diego Maradona scored with his hand for the first goal, which the referee failed to spot and eventually became famous as the “Hand of God”. While for the second goal, he was at the wrong end of the greatest ever goal scored by any player in World Cup stages as Maradona dribbled past five players before rounding him off to score the winner.

“I don’t believe it. David Beckham scores the goal to take England all the way to the World Cup finals. Give that man a knighthood.”

This was the comment made by the commentator as the Einstein of football physics scored an impeccable goal against Greece in the extra time to take England to the 2002 World Cup finals under Sven-Göran Eriksson.

He might have scored only 17 goals for England but that goal and yes that one particular goal defines Beckham. That one moment of sublime magic took him to the pedestal of legend.

His litany of errors were forgiven with that one golden strike. He earned 115 caps for his country and has been one of the finest ever footballer the nation has produced. Not many people have the distinction to be a hero both at Manchester United and Real Madrid.

“Bobby Moore was the best defender in the history of the game.”

The legendary West Ham skipper had a great bond with Wembley. In 1965, he lifted the European Cup Winners Cup after West Ham defeated 1860 Munich 2–0 in the final and the following year he captained the England side to World Cup triumph at the same venue beating West Germany 4-2 in the finals.

He is a national icon whose legacy will never be vanquished. The great man died in 1993 at the age of 51 after suffering from bowel and liver cancer.

Bobby Charlton is widely regarded as one of the best midfielders of all time. He is a Manchester United legend having made 748 league appearances, scoring 199 goals and of course he is a national hero as well.

He was one of the lucky survivors who escaped the horrors of the Munich air disaster and played a key figure in Sir Matt Busby’s post-Munich rebuilding programme.

In the 60’s, the trio of him, George Best and Denis Law earned Manchester United great success. He won the European player of the year in 1966 and also won the FIFA World Cup Golden ball award in the same year for his outstanding performance in the entire tournament.

Charlton played a major role in promoting Manchester’s bids for 1996 and 2000 Olympic Games and received the knighthood award in 1994. He was also an inaugural inductee to the English Football Hall of Fame in 2002.

When English football was at its nascent stage, he was one of the finest stars of his era. He played all his life for Wolverhampton Wanderers and captained England a record 90 times.

He made his England debut post World War II in 1946 and within a couple of years was made the captain. In 1952, he surpassed Bob Crompton’s appearance record for England and also earned the distinction of being the first footballer in the world to earn 100 caps.

The best thing about him is his exemplary defensive records. Despite playing as a defender he was never cautioned or sent off by any referee.

Talk about the modern greats, well here is the one.

Critics can roll over with the debate that is he is not world class, he lacks tactical awareness and what not, but if any player who epitomises the “bulldog spirit”, point the finger who the man who bled Red in colour all his life.

He is a fantastic player (with flaws added) and deserves to be among the pantheons of great.

After Kenny Dalglish, he is probably the greatest player Liverpool has ever seen and over the years he has carried the burden of his club and country on his shoulders.

At 32, he is still going strong and probably would continue playing for another World Cup. Therefore, he has the best chance of surpassing all the legends mentioned above in terms appearances for his country.

While Ashley Cole will be joining the list very soon, the likes of Frank Lampard and Wayne Rooney may well register their name in this Hall of Fame.