This time it’s certain: Edinson Cavani will leave PSG in June, after several years of rumours of discontent from the Uruguayan. French publication Le 10 Sport make this bold claim in their monthly magazine for the February edition.

Cavani loves to play in the #9 role, but PSG manager Laurent Blanc uses him in wide positions. The Uruguayan is naturally frustrated and wants a move to a big European club where he would be allowed to play in his natural role. 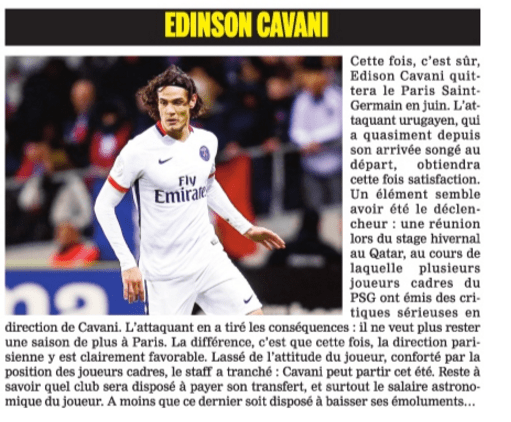 Till now, PSG have tried their best to make him happy but the club is now reportedly fed up with his attitude and so are some of the senior member of the squad.

It has come down to a point where PSG feel it’s time to cut off ties with the former Napoli striker. He will be allowed to leave the club. Only thing left to know is which club will be willing to pay a high transfer fee for him and especially his astronomical salary.

Premier League clubs Manchester City, Manchester United and Chelsea have all reportedly shown an interest in signing him. PSG value him at around €40m which could put off any potential suitor from signing the 29-year-old striker.