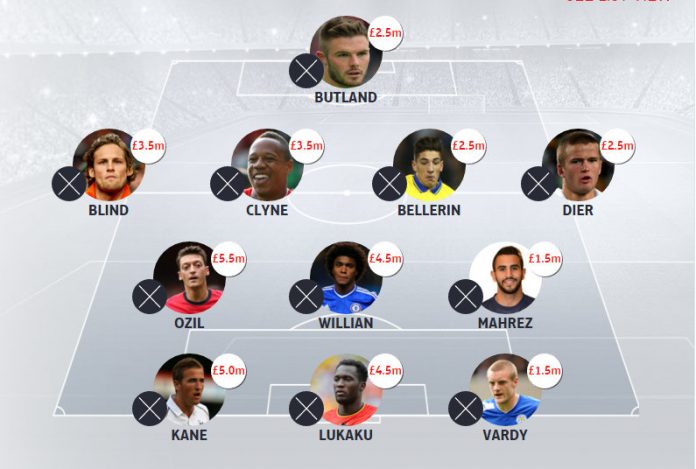 If asked to pick your ultimate footballing dream team during last season, a fair few eyebrows would have been raised if you picked a load of Leicester City players. Those eyebrows would remain firmly unmoved this time around. Mr Claudio Ranieri has transformed the club into top four contenders overnight, bringing in superb talent and creating a tip-top starting XI. Now, with The Sun Ultimate Dream Team, it’s your turn to be the Tinkerman and stun the fantasy football world!

Do a Leicester, or something similar, and you could just secure a chunk of the amazing £1m prize warchest on offer.

Simple as you like, The Sun Ultimate Dream Team is spread over three game types; Season, Weekly and Europe. So if you fancy building a team and slogging it out with them over 38 games, you’re covered. If you like the idea of picking a brand new team every week from five different competitions, you’re good to go. And if you’re partial to a bit of continental action, from February 2016 get ready to go full Cristiano Ronaldo and rake in the points from either the Champions League or Europa League competitions.

To enter a team, it’s totally free, with purest fantasy football satisfaction guaranteed. But for just £2.99 a month, you can join Club Dream Team. With this membership, you get a shot at cash prizes galore, two separate Season teams that gives you more chances of winning, and loads of other amazing tips and benefits to help you along the way to ultimate glory. Is there even a choice?

As a Club Dream Team member, that £1m cash pot becomes a possibility, with The Sun staff giving out cash to 100 winners a week, 500 a month and 7,000 across the season! The Weekly game also has its own cash incentive of £10,000 to be spread over 250 winners.

To make things even more worthwhile, The Sun are letting players join Club Dream Team for a whole two months for free, just to show you why theirs is the most popular fantasy game in England.

So let’s get to it. The first part of the signing up process gets you picking your team straight away. You’re first team selection automatically goes flying into Season Mode, totally free, and from there you can select to play other game types if you please.

Pick a 4-4-2 or a 4-3-3 formation and start throwing your players in. Romelu Lukaku, Jamie Vardy, Harry Kane – every Premier League player is up for grabs, and it’s up to you to make sure your team value falls below the £50m mark.

But with the swashbuckling Riyad Mahrez costing only £1.5m in the game, you’ve certainly room to manoeuvre. Check out our selection!

The rules are simple – score points during a gameweek from your selected players, more points than your other dream team managers, and win big. Player points are easily broken down. Score five points for a goal, three for an assist. If a player bags a hattrick, he gets five extra points. The referee brings with him minus points. If he send one of your players off, it’s minus five points for you, while a booking takes off three points from that gameweek score.

The Star Man award, given to the man-of-the-match, brings with it five points for you and the player. Also, if a player scores a 7/10 or more performance in a match and he’s in your dream team, its three more points on the board.

Goalkeepers and defenders are also crucial. A clean sheet is worth five wonderful points, and if a keeper saves a penalty (or the player puts it wide), he picks up a further three points.

Clearly the dream here is a man-of-the-match goalscoring performance from your keeper, setting up another two, keeping a clean sheet and saving two penalties. If only, right?

With your team sorted, you can now choose to enter a whole new team for the Weekly game, with the chance to win one of 250 cash prizes from a pot of £10,000. Sign up for Club Dream Team and take your best shot! If you fail, never fear, you can pick a brand new team the very next week for another roll of the dice!

The Sun Ultimate Dream Team also has you sorted during the midweek downtime. From your home page, you can access the News & Gossip tab, which will keep you very much up to speed with all the latest goings on in the Premier League. There’s also the Planet Football tab, which brings the rest of the footballing world to your fingertips; Premier League Highlights which are always a great watch (unless you’re a Chelsea fan); and Pub Talk – a place for podcasts, chats and quizzes. What more could you need as a fan?

I’ll tell you what you need. Stats, and lots of them. We die-hard fans need to have all the latest figures and numbers at our disposal, and of course, The Sun Ultimate Dream Team has stats in spades. Player ratings from every single game, bookings, injuries, and in-depth individual stats from across the board. Not only will you have the edge in a footballing debate with your mates, you’ll also be best placed to launch an assault on those cash prizes we talked about earlier…

So if you’re after a popular fantasy game full of superb features and a huge cash incentive, look no further than The Sun Ultimate Dream Team. We reckon we’ve a decent shot at the treasure, and we’d love to see if you can beat our starting XI. See you in Club Dream Team.