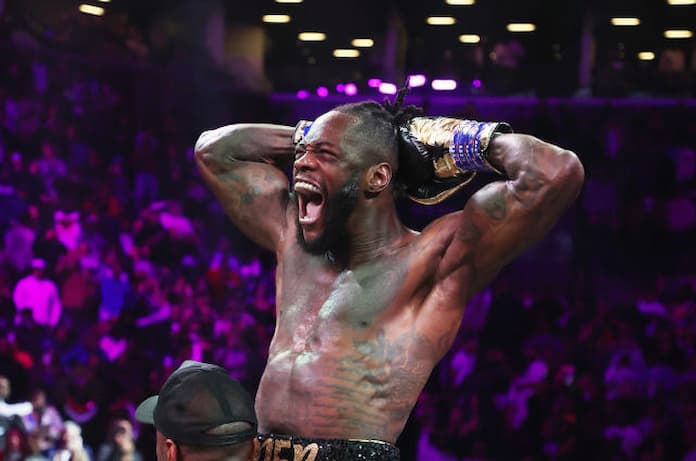 DEONTAY WILDER returned at the weekend with a stunning knockout over heavyweight contender, Robert Helenius. After his first win since before the Tyson Fury trilogy, boxing fans were quick to speculate who ‘The Bronze Bomber’ could fight next.

Returning in such emphatic fashion has got the whole boxing world talking about Wilder again. So, who should he fight next? Wilder wants to be heavyweight champion of the world for the second time, and has called out either Oleksandr Usyk or Andy Ruiz Jr as his next opponent.

After his emphatic 30 second knockout of Robert Helenius at the Barclays Center in New York on Saturday night, Deontay Wilder is already looking at his next opponents for 2023.

‘The Bronze Bomber’ made a stunning return to action over the weekend, knocking ‘The Nordic Nightmare’ out in the very first round, with the first real telling punch he landed. It’s clear to see Wilder still possesses that devastating power, and is a problem for anyone in the heavyweight division.

With his record now at 43-2-1 with 42 knockouts, Wilder boasts the best KO record in the heavyweight division. Fans are excited at the prospect of watching Deontay Wilder fight again, now that he has got back to winning ways after the Tyson Fury trilogy.

Two names that were posed to Wilder as potential opponents were Andy Ruiz Jr and Oleksandr Usyk. Usyk holds three of the four heavyweight titles after beating Anthony Joshua on two occasions. Ruiz is back and winning big fights, so is a credible opponent too.

Wilder’s goal is to become a two-time heavyweight champion of the world, so Oleksandr Usyk is the obvious fight to make. However, if Usyk for whatever reason is unavailable, the 36-year-old is open to a fight with the first ever Mexican world heavyweight champion, Andy Ruiz Jr.

When asked in his post fight interview who he wants next, Wilder made it pretty obvious that the Usyk fight is his number one target:

“I have been hearing rumours about Usyk, but he’s not here, is he?

“When guys see these knockouts, they turn the corner away from me. So, I’m down for whatever, whether it’s Andy Ruiz or Usyk, let’s bring it on.

“Deontay is back and the excitement in the heavyweight division is back.”