The 20-year-old midfielder has been an epitome of consistency for the Hammers, and he is a very important player for Manuel Pellegrini’s side.

Rice started both of England’s 2020 qualifiers against Bulgaria and Kosovo and impressed in both the games.

He took to social networking site Instagram after the match and said he is buzzing for his teammate Jadon Sancho who scored twice against Kosovo. 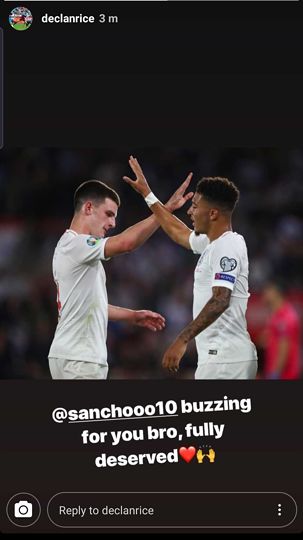 Sancho was heavily linked with a move to Manchester United during the summer transfer window. However, he stayed put at BVB, and signed a new bumper contract worth a reported £190,000-per-week.

The 19-year-old has recently stated that he would be open to a return to the Premier League later in his career.

England conceded early in the match but they came back strongly scoring five goals before the break.