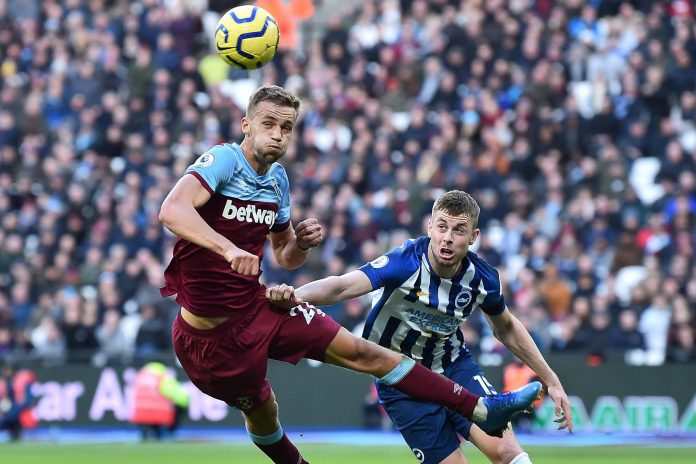 West Ham squandered a two-goal lead to manage a 3-3 draw against Brighton at the London Stadium on Saturday in the Premier League.

The Hammers are now without a win in their last six games in all competitions.

West Ham signed Czech Republic midfielder Tomas Soucek from Slavia Prague on loan (with an option to buy) during the January transfer window, and Moyes didn’t waste time to hand him his Premier League debut.

After the match, Moyes has praised the midfielder heavily.

“I think today Tomas was very unlucky not to score a couple of goals as he was in the box. His effort was something we’re glad to see as it’s someone who will get in the box from midfield and score goals here. I think for his debut you’d have to say that he did really well,” said Moyes, as quoted by Football London.

Issa Diop gave the hosts the lead while Robert Snodgrass scored twice for the Hammers. Angelo Ogbonna scored an own goal while Pascal Gross and Glenn Murray’s dramatic late equaliser earned a crucial point for Brighton.

The 24-year-old midfielder had two shots, played one key pass, made five tackles, three interceptions and three clearances, according to whoscored.com.

Soucek has impressed in his first match for the Hammers, and the fans will be expecting more from him. He was brilliant with his defensive shifts and got himself into good scoring positions in the opposition box.

West Ham have dropped into the relegation zone following the result. They are 18th in the table with 24 points from 25 games.