With the World Cup well and truly gone but not forgotten on England’s behalf, is the honor of playing for one’s country losing its value?

Fabio Capello named his squad for Wednesday’s friendly against Hungary on Saturday night and since then has been embarrassed only to be rejected by two of England’s fringe players.

Paul Robinson announced his retirement purely for this reason as he felt he deserved better than to be named as a 3rd or 4th choice keeper under Capello. Wes Brown has since followed the Rovers’ keepers lead by opting out of playing for is national side from now on.

Such a clear lack of communication is something that has been evident and rightly pinpointed as a major problem within the set-up with seemingly the players and indeed the manager not understanding their roles within the system.

A simply laughable scene saw Capello clearly baffled by Michael Carrick’s inclusion in Sunday’s Community Shield victory over Chelsea. The England boss was caught mouthing “injured?” to the United midfielder and miming a frankly pitiful call me sign making it abundantly clear that contact between player and manager is not what it needs to be.

In a press conference on Monday afternoon Capello was questioned about his communication with the players and merely laughed off the suggestions but something is clearly not right within the camp. 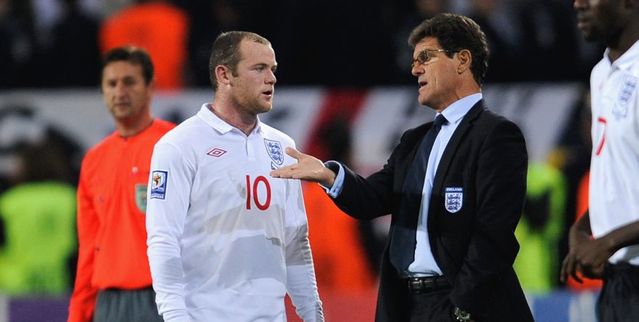 It seems that with the squad selection, Capello is trying to go some way in emerging young English talent with the inclusion of Kieran Gibbs, Jack Wilshere and Adam Johnson but it is the departures of Robinson and Brown that have stolen the headlines. The two retirees are both just 30 years old and speculation has arose that some of the players do not hold a international call-up in as high regard as they used to.

A squad overhaul may be just what the doctor ordered in terms of a shake up of values of the current ever present England players. World Cup flops such as Wayne Rooney, John Terry and Steven Gerrard may well benefit from some much needed pressure coming from new blood within the England camp.

A lack of passion seemed evident in South Africa and psychologically throughout the tournament the squad seemed a little disconcerted both on and off the pitch.

The money in football these days and the astronomical wages paid by the clubs may well be a factor in attaching a player to a club rather than their country. It has been for many years, without question that the superstars of the England team have not performed to the level that they do week in, week out in the Premier League.

It is until these values are changed and the mindset of the players are set right, that England will be able to push on and improve as a unit with some much needed new faces revitalizing the squad.