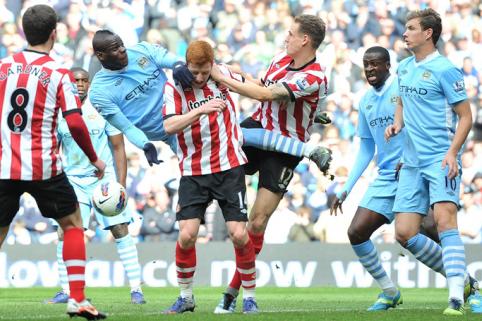 Manchester City are a top priced 1.3 to beat Sunderland at the Etihad, but make little appeal at odds-on and a better value bet is for both sides to score at 2.2 with Boylesports.

However they have won just one of their last five Premier League games against the Black Cats (W1 D2 L2), and are now on a run of 10 games in all competitions without keeping a clean sheet.

Sunderland are also unbeaten so far this season and given that this fixture finished 3-3 at the back end of last season this is a tough game in which there is likely to be plenty of goals.

That makes the standout 2.1 on offer with Boylesports about both sides to score look a good starting points as far as bets are concerned.

Steven Fletcher, who has scored five goals from five shots this season in the league for the Black Cats, is going to be a real threat to the City back-line.

If anyone is goal to score for Sunderland then it is surely him, and at 4.5 with Boylesports to score anytime he looks well worth a wager.

I think Sunderland are capable of causing an upset, and was tempted to put them up to win at 12 with Boylesports.

However they can be backed at 9 with bet365 and Betfred in the draw./no bet market and I would rather take a few points shorter for the added insurance if it ends all square.