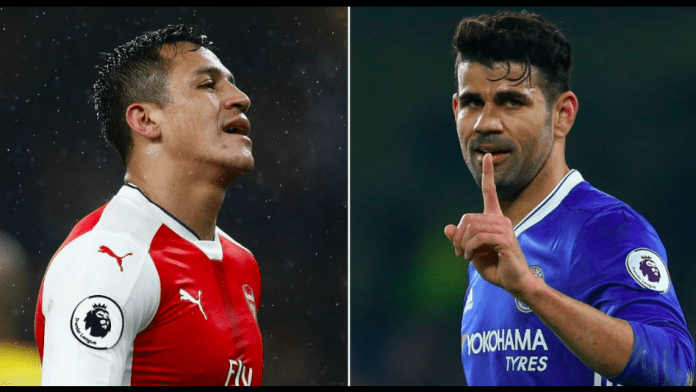 Arsenal could have closed some gap on Chelsea who dropped points against Liverpool mid-week, but Arsene Wenger’s men suffered a humiliating and possibly title diminishing ending loss against Watford. A win over the Hornets and subsequently one against Chelsea would have put them in a spot where they could exert pressure on the Blues. But the Gunners got it all wrong and found themselves nine points behind the league leaders. They now take on a confident Chelsea unit, whom they comfortably beat 3-0 earlier in the season.

Here are the three key battles that could sway the weight of the game.

This is the match-up on everyone’s minds. The performances of the Premier League’s leading goalscorers will naturally be imperative in deciding which team will come out on top.  The Chilean forward has already scored 15 goals and assisted eight in the Premier League this season, bettering last season’s tally. Sanchez is a man in form, but Diego Costa has hardly been a step behind. Putting on his most impressive season as a Chelsea player, Costa has also fared better than he did last season and has managed a total of 15 Premier League goals this time out.

Costa vs. Sanchez is truly a neck to neck affair as the two have mesmerised all season. Despite both having some issue with their respective clubs at one stage of the season, they have not let these matters show in the on-pitch performance. Costa’s goals can fire Conte’s team one step closer to the title. Sanchez’s services could potentially stall Chelsea’s title advances.

Arsenal’s biggest problem against Watford midweek was in the midfield. The Gunners were short of options in this area in the absence of Santi Cazorla. The Spaniard can do a number of things, but most importantly he can set the tempo of the game from the heart of the pitch. Someone like Aaron Ramsey could be more responsible in this department in Cazorla’s absence, but he got injured against Watford which rules him out for the Chelsea tie.

Alex Oxlade-Chamberlain excelled in the central midfield spot against Southampton in the FA Cup. He partnered Coquelin against Watford after Ramsey went off and despite limping toward the end of the game after taking a kick to the knee, will probably start against Chelsea.

Wenger has added more subtext to this battle after saying he tried to sign Kante twice, once when he was in France and later at Leicester. Does this mean, Chelsea pipped Arsenal to Kante’s signing last summer? The France international has continued his scintillating form at Stamford Bridge, and his performance against Liverpool caught everyone’s eyes. Chamberlain would need to beat his presence and try and dominate the heart of the pitch, by dictating the tempo, bringing the game forward and linking up with the attackers. If the “Ox” can somehow do this, Arsenal could be the team dominating proceedings at Stamford Bridge and coming home with three points.

With Arsenal possessing some creative players, Chelsea midfielders could have their hands full. Thankfully, they have a lot of classy players specialising in reducing these threats. N’Golo Kante is mostly responsible for keeping things at bay, but the duty unmistakably doesn’t lie solely with him. Mesut Ozil can be unplayable when he wants to be, and Chelsea will need to make sure Arsenal’s number 11 can’t thread those eye-watering passes and make things simple for his teammates.

Nemanja Matic will need to curb his threat or assist in doing the same. With Kante making all the headlines (and rightly so), Matic has gone somewhat unnoticed, but the Serbian has done well this term. He averages two tackles every 90 minutes along with 1.9 interceptions. He also plays further forward than Kante and links things up with the likes of Pedro, Hazard, Moses and Alonso, taking an active part in the attacking proceedings as well. Matic can have an influence in both the departments, but if he manages just to keep Ozil quiet, he would have done his job.