Charlie Austin: The New Offensive Leader of the EPL?

In our previous Most Valuable Offensive Players (MVOP) ranking analysis, we shared that the top was cluttered with established stars. There was only one player that stood out from the rest, and that player now leads the MVOP rankings.

Charlie Austin, in only his 2nd EPL season, continues to shine for Southampton. Austin currently leads all other players with 6.60 points earned. That total makes up 55% of Southampton’s 12 points earned this season. 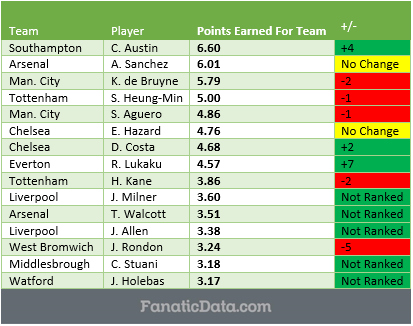 Charlie Austin is a revelation thus far, and we hope he continues his offensive performance. Jamie Vardy and Riyad Mahrez brought a new and exciting wrinkle to the league with their dominance last season. Austin would be doing the same.

Of course, the offensive performance of other players in the ranking shouldn’t be lost either. In 2nd place is Arsenal’s streaking Alexis Sanchez whose rank remains unchanged since Matchday 6. Last season, he earned his side a total of 13.18 points.

He has already earned 46% of that total after 8 matches this season. In 3rd place is previous leader Kevin De Bruyne who missed a match due to an injury. We expect him to get back to earning points soon once he gathers form.

Players 4-12 in the MVOP ranking are all from established EPL teams which makes those players’ performances predictable up to this point. The most unexpected player in the rankings is Watford’s José Holebas.

Not really known for his offensive prowess, Holebas scored a cracker off a poor clearance from the opposing team to earn all 3 points for his side this past weekend. Don’t expect too many such goals from him during the remainder of the season.

Utilizing the most commonly used formation in the Premier League, 4-2-3-1, we determined the most valuable starting squad through Matchday 8 (excluding goalies). 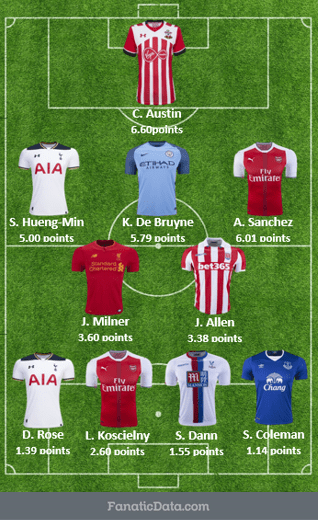 There are 6 new players in the Most Valuable Starting Squad compared to the previous one. Charlie Austin for Southampton, James Milner for Liverpool, and Joe Allen for Stoke City are the first players to represent their clubs in the starting squad this season. Laurent Koscielny became the first player this season to reenter the starting squad. He was previously on the squad after Matchday 4.

Get an update for the rankings and starting squad after Matchday 10.