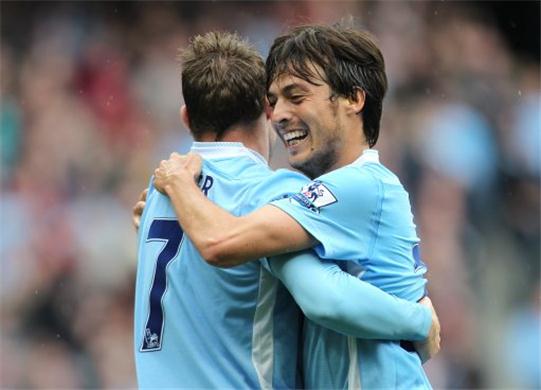 If there was a certain area in which Manchester City beat Manchester United so assuredly last weekend, in one of the massive premier league results of recent times, it was the wings.

Where Ashley Young and Nani played the typical winger role, taking on Manchester City’s fullbacks, trying to win those one on one battles, Manchester City’s wingers, James Milner and David Silva, made a point of winning the game elsewhere – certainly their involvement in the vital goals that pushed the Sky Blues clear of United was a mastery of movement rather then setting out to burn fullbacks.

Silva provides a fine example for the first goal, moving into a position where he merely has to shrug off the attentions of Wayne Rooney in order to feed Milner, who needed to beat no-one before finding Mario Balotelli expertly with the goal making cross. It was almost like Manchester United hadn’t been supplied with the new rule book – begin on the wings Milner and Silva did, but it could be hardly said that they are there to beat the wingers and supply from there.

Their role lies further in field, beginning from a position from which the defensive midfielder does not realistically wish to move to keep a closer eye on them, and moving inside to a point where the fullbacks do not want to follow them either. The result is that both midfielders and fullbacks have a problem, and quite a serious one at that – the winger is playing between them like he might usually play between the midfield and defence, sowing carnage in this new space. 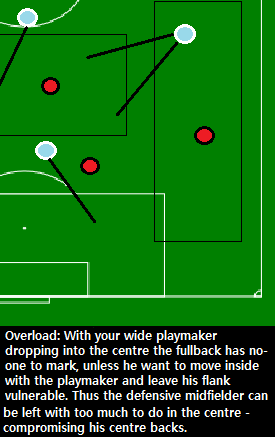 Of course, this kind of revolution of sorts is nothing new. Tactics throughout football have revolved around the new thing that team have had to scramble to counter, or simply out-do. Deep lying playmakers completed a big cycle just this decade, when they went out of fashion with Guardiola, and then back into fashion as he moved into management.

And so, with a result that hammers home the effectiveness of the roles Milner and Silva played in demolishing United, perhaps such a role as fullback will face extinction at the highest level as use of wingers in the Man City vein increases. After all, what is the use of someone defending the wings if the winger is rarely attacking that wing?

And similarly the defensive midfielder faces a similar problem, because as inevitably the use of defensive midfielders eliminates limited, central trequartistas from the game, so perhaps they themselves become redundant, barring being a water carrier – a free man to link defence and attack.

Of course, the area between attack and defence still needs to be protected – certainly you do not want to give that entire space to someone like Silva to strut his stuff – but at the same time, if suddenly you are looking at not one but two players looking to move into the gaps a defensive midfielder must inevitably vacate, is he really worthwhile being there?

Of course, these are questions that will be answered one way or another in the near future, as answers are always found for some new tactical nuance. But, in the meantime, might as well throw around some theories.

A very simplistic view with complicated consequences – but what if? If we are having the wingers move inside and into the positions where a fullback doesn’t like tracking them, then the fullback has to change to counter that winger’s style, moving into the best positions to counter the threat, be that inside in the ‘wide hole’ if you like or, in a move back to the old fashioned, if the winger chooses to move wide and try to get a cross in.

In effect, this player would have to be a wraparound shield for his centre back, moving to counter the winger where ever he moves in the attacking third. Essentially making him a defensive midfielder-fullback hybrid, capable of dealing with attackers from both zones. The Result? 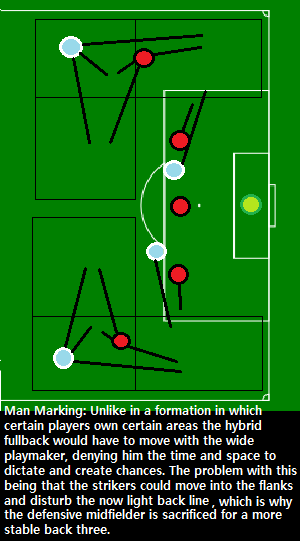 The problem with this, and a problem that faces most back fours today, is that to tighten up in the middle of the park to counter this new development opens up a lot of space on the wings, as having two of these hybrid fullbacks undoubtedly would. So why bother changing formation?

The answer to this would be that the flat four, even when narrowed to try and prevent the wing-playmakers slipping through killer passes is leaving that wing-playmaker with a lot of space to make his pass anyway, be it to try and thread a ball though the defence to an attacker or finding overlapping runs.

What the hybrid fullback would do is track these playmakers from the wing into the centre of the pitch, passing the player on if he goes into the other hybrid fullbacks jurisdiction.

The other problem with this idea is that with your fullbacks running off to try and stop the wingers, in the event that they fail your centre-backs are sitting with a gaping space either side of them for those strikers to run into and cause damage. A lot of damage. On a 6-1 thrashing level in fact. Which suddenly, makes having a third centre back more desirable.

So there you, arguably, have the new position for your defensive midfielder – holding the core of your centre back formation together to better protect against potential wing raids. Or, you know, just play a centre back there. In fact if anything, in this incarnation you have two defensive midfielders playing wider, rather then the fullback doing vise versa.

Still, this leaves the question of the touchlines – what would happen on the wings?

(or ‘The Very Lonely Wide Player’, if you like)

The lonely wide player is what would happen if wide playmakers were used in one side and not the other – forcing the opposition to potentially employ your fullback hybrids to counter them, while still having wingers against opposition fullbacks. As shown below, it has the potential to turn into something of a mano-a-mano show down on the flanks – winger against fullback, on either flank. Who wins?

Seeing as that wing-back is probably the type to exploit the space left by the melee inside between hybrid fullback and playmaker, the winger must be forced back to cover the space that said rampaging wing-back might exploit. At the same time, that winger being forced back is robbing him of the attacking thrust he is supposed to bring – advantage wing-back.

Unless the winger pushes back at the wingback, when suddenly it becomes like a tug of war on slippery ice – one can be pushing but one mistake and your opposite number races up the other end, complicating things for the defence immensely.

In which case, what you have is a fascinating battle down the entirety of both flanks between two solitary men, who in the scope of the space they occupy, could well decide which team wins and which team loses. Suddenly then, this wide player needs stamina, attacking and defending ability in spades, skill. They have, in other words, to be stellar players taking up these wide positions while everyone else, even the hybrid fullbacks, are likely to be much more narrow entities in response to the ‘wide players’ moving into more narrow positions.

Of course this isn’t entirely true – the likes of Silva and Milner will drop into wide positions as well, thus the need for a player to cover all the same places these players do. But just as the point of the hybrid fullback is to address the change in emphasis of the wingers, the man who knows his job is to run the wings is another byproduct.

In fact, to adapt to such a change of emphasis could change everything – why have a midfielder dedicated to breaking up opposition moves if you have two fullbacks doing the same job?

Especially considering those player are more likely to be narrower, thus allowing those fullbacks a chance to feed a potentially more creative and forward thrusting midfield. Aside from tracking other midfield runs it’s almost totally unnecessary to have a purely defensive minded midfielder, thus you might see the return of box to box midfielders, which as it stands is perhaps too undisciplined a role by it’s very nature to be viable at top level play.

As for your central defenders, even with a three man defence space will open up on the wings – maybe the centre backs have to be more versatile in order to counter the marauding run from a wide man as well. Of course eventually new ideas (or old ones recycled) will come along to challenge the just hardening notions of an age before – there will never be a tactical layout that is impossible to respond to.

So maybe, fullbacks which stay wide and central defensive midfielders aren’t quite so doomed as this pessimistic delusional articles writes after all. Hope you enjoyed it though.