With just 4 games to go for the top three in the Premier League, Manchester United have a 90% chance of winning the title according to the Castrol EPL Predictor. Chelsea fans aren’t letting numbers get in the way though.

On a weekend where cocking a snook at reality and progress is mandated by royal decree in England (and by extension, in the US media and therefore ALL OVER THE WORLD), lesser clubs than Chelsea (including, err…7 time league winners Aston Villa and 5 time, 5 time European Champions Liverpool) will be striving to overturn the odds and make their own fate.

Except for Arsenal. After helping Birmingham to the Carling Cup, a Manchester team to the FA Cup and Barcelona to a final berth in the Champions League (who taught Barcelona to dive and complain?), they’re now hell-bent on helping Manchester United overtake Liverpool in the English football championship stakes.

Let’s hope Wenger’s kids are buoyed by the weekend’s events, find inspiration in such outdated cliches and go out at the Emirates to give United a complete hiding. They have a 40% chance of doing so (according to Castrol), which is flimsy ground to stake the excitement of a whole month on.

On to this weekend’s predictions, plus a look at how the Castrol EPL Predictor works and where your team is likely to end up at the end of this season.

Now I’ve been working on and off on various predictive models to determine football match results, and there are three things you learn after spending even a few minutes working on such a model:

1. The more data you use, the more confusing and inaccurate it gets.

2. The right indicators are those that are directly relevant to results and evenly applicable across a whole range of different scenarios.

3. At the end of the day, a model’s job is to predict based on statistics and data available to it. It will NOT tell you the future, so don’t blame the model if it gets a result wrong or if it predicts something you don’t like.

If you don’t adhere to the second part of point #2, you won’t have a workable model that can predict matches across the whole spectrum.

If you don’t understand point #3, you need to get your head checked.

Back to the Castrol EPL Predictor. Is it perfect? No, football has too many variables to be able to have a 100% accurate predictive model. Does it work? The proof is in the results, and here at Soccerlens we’ll be testing the Castrol Predictor versus actual match results each week to look at where it gets things right (and where it gets them wrong).

Here’s a look at the weekend’s matches, as predicted by Castrol: 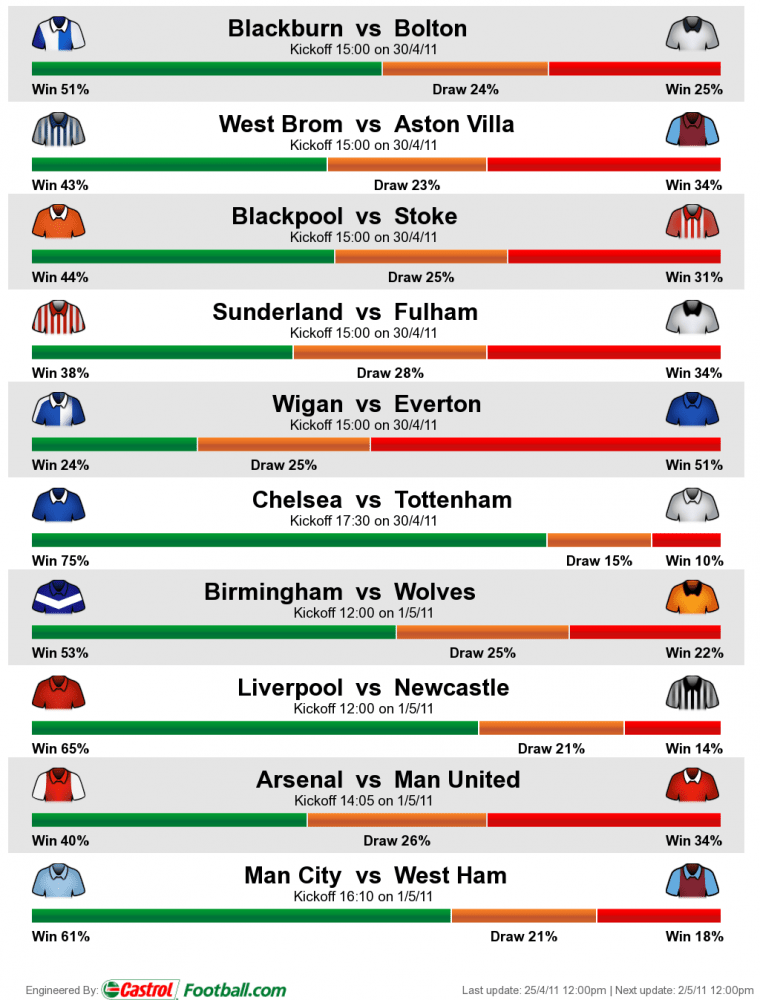 As promised earlier, we’ll be tracking all the match results this weekend and comparing them with Castrol’s Predictions and share this data next week.

And here’s a look at the predicted final Premier League standings: 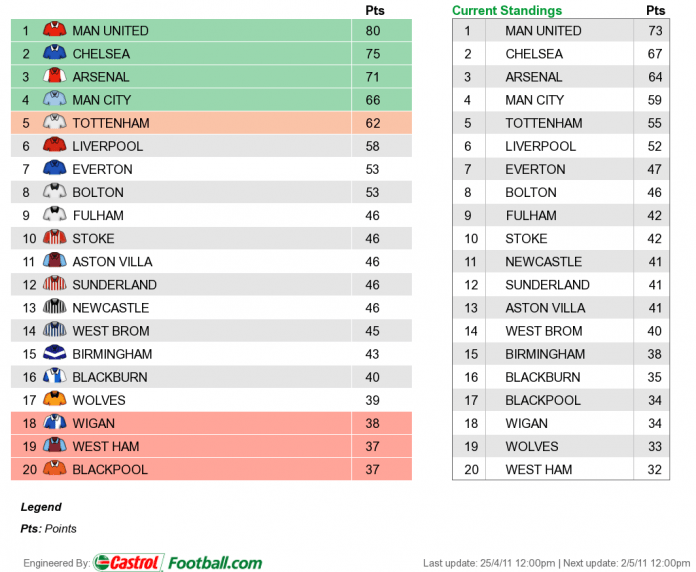