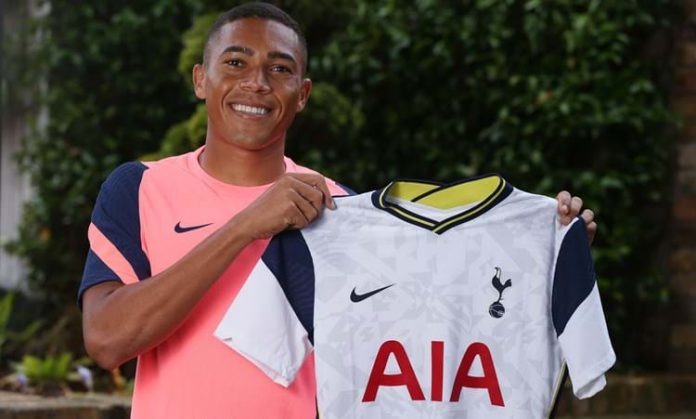 Spurs official Twitter handle shared a clip of the 25-year-old behind the scenes ahead of the move.

Step behind the scenes at Hotspur Way as Carlos signs for Spurs! 👀#BemVindoVinícius ⚪️ #COYS pic.twitter.com/7cgOzQAHA5

Vinicius had his medical at Tottenham Hotspur way, and he didn’t hesitate to show the medical team a bruise he had sustained in training from Jan Vertonghen while at Benfica.

The Belgian left Spurs after eight years for the Portuguese top-flight side in August, and he definitely didn’t waste time showing Vinicius and co what he’s made of.

Vertonghen only reminded the Brazilian of what to expect from defenders in the Premier League, and he has to be prepared for more of such tackles going forward.

Tottenham’s new number 45 ended last season with 18 goals in 32 league matches, emerging as the joint top goalscorer in the Portugal’s Premiera Liga, and he will be keen to prove his quality in the English top-flight and secure a permanent move next summer.

Vinicius won’t be making tomorrow’s trip to Old Trafford, but he is expected to be ready after the international break, and having him and Gareth Bale available for the West Ham United clash will be a huge boost.