Can Liverpool and Tottenham catch up with Manchester City? 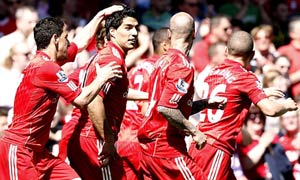 Kenny Dalglish was at pains to point out that Liverpool were no longer a 2-man team – but whether they are a club fit to play in Europe depends on the last three games of the season.

Liverpool are 7 points behind Manchester City and 1 behind Tottenham, and with two matches to come amongst these three teams, there are still some twists left in the race for the final European spots.

Liverpool play Fulham at Craven Cottage tonight, before hosting Tottenham at Anfield on Sunday the 15th and again away from home to Aston Villa on the final day of the season.

Liverpool have a 46% chance of beating Fulham and with City hosting Spurs on Tuesday, even a point against Fulham could keep Liverpool ahead of Tottenham going into the game on Sunday. Tottenham’s inability to beat Blackpool has given Liverpool the advantage, and the Reds can capitalise on it if they can get 5 points from their next 3 games (assuming that they beat Spurs).

Getting at least a point each against Fulham (74%) and Aston Villa (68%) is within Liverpool’s grasp, and will finishing 5th will mark Liverpool’s complete and remarkable turnaround under Dalglish.

If Liverpool win all three games it would put them on 64 points. They would also need Manchester City to lose at least two games and draw the third one (beating Spurs means they’ll stay ahead of them as long as they win the other two as well) to finish in 4th spot. As poor as City have been at times and while there’s every chance Bolton could turn them over at the Reebok, losing two games at home would be a catastrophe for City.

Champions League may be one miracle too far for Dalglish.

Tottenham have only themselves to blame for their poor recent form that has seen them tumble out of the top four and now, close to finishing the season with under 60 points. Tottenham’s next game is away to Manchester City, and on recent form they don’t seem capable to get away with more than a point.

The game after is Liverpool on Sunday, and back to back away games against top quality opposition is likely to wear down an already tired squad that probably wishes the season ended before they played Real Madrid in the QFs. I don’t see Tottenham winning at Anfield, not with their current momentum and if they don’t get more than a point in their next two games, their fate is out of their hands as far as Europe is concerned.

On the flip side, if they beat Manchester City on Tuesday that leaves them 3 points behind City with two games to go. They would then require City to pick up no more than 2 points, which is possible (home and away draws), and would also need to beat Liverpool at Anfield and Birmingham at home.

As miracles go, this one is as unlikely as Liverpool’s, more because of Tottenham’s problems in winning all three games as opposed to City losing so many points.

Prediction: Tottenham to finish on 59 points.

Manchester City just need to win against Tottenham tomorrow night, or win any one of their three remaining games in the league, and they’re guaranteed Champions League football. It’ll take a massive dip in form, comparable to Chelsea’s mid-season slump, for them to get less than 2 points in the last three games.

The Champions League battle could be over on Tuesday night once City and Spurs are done with each other. A Tevez cameo might prove the difference, or maybe Balotelli will prove his worth. The one thing City need to do is to play Adam Johnson from the start – Everton’s display against City showed how easy it was to hold off a one-paced, one-dimensional side that didn’t have the direct approach of Tevez.