Although not many people are too eager to go watch the match at Wembley but we can be sure that this game, along with many to come, will see Fabio Capello build a team that will be a strong contender at Euro 2012.

Theo Walcott was left out in the World Cup by Capello and to prove him wrong, Walcott started his Premier League action on a high and netted four goals in 187 minutes he played.

For Capello, Walcott’s lightening pace was overwhelmed by the lack of a footballing brain as many pundits have mentioned that he runs out of ideas as quickly as he is running. Maybe his brain is having a hard time keeping up with his feet.

The Arsenal man, nonetheless, has played himself back in Capello’s team and has made it to the squad against Bulgaira.

The other wingers available to Capello are Manchester City’s trio Adam Johnson, James Milner and Shaun Wright-Phillips and Aston Villa’s Ashley Young. And looking at the 2010/2011 season of the English Premier League so far, none of them stand a whisker of a chance against Walcott.

Only SWP has spent lesser time on the pitch than Walcott but only Milner has managed to score… once. Walcott has clearly been the most agressive in front of goal with just one shot on goal lesser than the cummulative shots on goal of the rest.

Stats show that while Walcott has been busy attempting to score goals himself, Young and Milner have been creating chances for others. Then again, Walcott has delivered the second most successful crosses after Young.

Here is what Theo Walcott had to say about his England future:

Bulgaria, on the other hand, have worries in the defense sector. In the FIFA World Cup qualifiers, Bulgaira conceded 31% of their goals in the first 15 minutes of their games – a joint-high with Iceland.

England, however, was more potent later on in their games on their road to South Africa but they still managed four goals in the opening 15 minutes of their games, a total only three other sides could better. Also, three of those four goals came at home for the Englishmen. 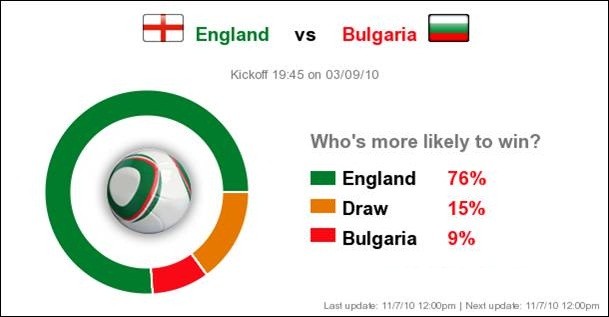