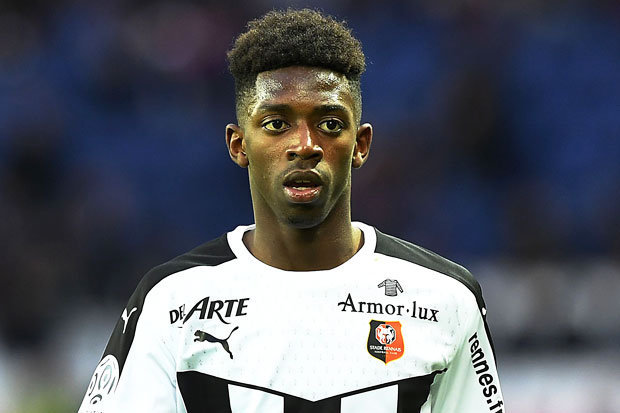 German giants Borussia Dortmund are looking to steal a march on other potential suitors for Rennes’ young winger Ousmane Dembele, who is enjoying a breakthrough season for the Ligue 1 side.

Dembele has scored 12 goals this season and made another five in 24 league appearances for the French club, and the 18-year-old is one of the most sought after young players in Europe.

The Frenchman’s mercurial rise has been the subject of interest around the continent with heavyweight Premier League and La Liga clubs have all been linked with a big money move for the youngster.

Liverpool were thought to have shown an interest in Dembele, having scouted him on several occasions this season. Jurgen Klopp is a big admirer of the youngster’s talent, and wants to add him to the Liverpool squad ahead of the 2016/17 season.

Dembele is a pacey and skilful forward who can operate on both flanks as also behind the striker. This season, he has played in different positions across the pitch, with Rennes manager Rolland Courbis even using him in central midfield as well. However, he is more comfortable leading the forward line, having scored seven goals in five appearances from central attacking positions.

However, it seems Klopp will miss out on the youngster to his former club, with French publication L’Equipe suggesting Dortmund are in pole position to sign Dembele, who is valued at around £12-15m.

The Frenchman did his best to stay away from transfer speculations, but admitted recently that he has been affected with too much rumours being circulated about him.

”I do not know what will happen this summer,” he said when asked to comment on his future.

“I have signed a three-year contract last November and I’m fine in Rennes. The transfer market rumours bother me, but we do not pay much attention.

Both the clubs will undergo a meeting on Wednesday and will attempt to finalise a deal for the prolific young winger. Apparently, Dembele doesn’t fancy a move to Germany, but with Rennes looking to cash in on him, he has very little choices left.