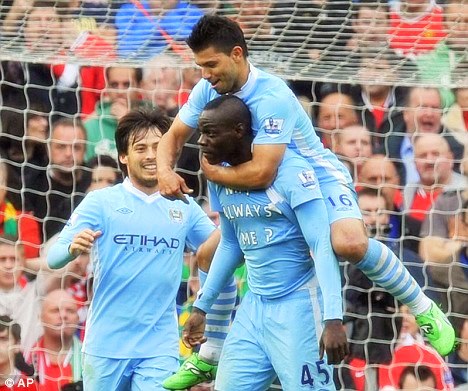 Following Manchester United’s humiliating defeat at the hands of ‘noisy neighbours’ Manchester City on Sunday, many pundits and journalists are suggesting the balance of power in English football has swung over to the blue side of Manchester.

It is hard to make arguments disagreeing with this notion such was the extent of the beating David Silva and co handed out to the red devils at Old Trafford on the weekend.

However, let us not forget that this isn’t the first time Sir Alex Ferguson and his team have found themselves on the wrong end of a hiding (Newcastle United 5 – 0 Manchester United ring any bells?), nor will it be the last, but one of the key psychological features of all Ferguson’s teams is their determination to react in positive fashion after defeat.

Rarely during his 25 year tenure at the club have United lost two games on the trot and I don’t foresee the current squad being any different – particularly not with Wayne Rooney on the form he has been showing this season thus far.

6-1 is of course a nightmare result for a club with the international stature of Manchester United and the scoreline can only be regarded as a mathematical embarrassment. However, lets look at some of the positives here: In truth the red devils did have the better of the first half (as they had the better of the entire 90mins during the Charity Shield match in August – glorified friendly though it was).

The scoreline only really became a romp during the final 7-8mins of game time, after United had played 40mins with ten men following Jonny Evans’ ill-advised sending off for hauling down the inspired Mario Balotelli, and then Darren Fletcher’s ‘false hope’ goal that brought the game back to 3-1.

For me the key contributor to the eventual hammering was actually this Darren Fletcher goal, United could have easily defended deep and kept the scoreline respectable and perhaps faced with a similar situation again when up against a much-rejuvenated City outfit, this defensive approach would be more advisable BUT United were always going to attack the game when 3-1 down at home with 20mins on the clock – it’s the only way they know how to play and I expected nothing less.

I would not say there was a ‘gulf’ between the sides however and things could so easily have been different if not for Evans sending off. It was a day for the blue side of Manchester, no doubt about it but even suggesting the ‘balance of power’ has swung over to the blue side of Manchester is foolish in my eyes as everyone knows you simply cannot bet against Sir Alex or his team – they always find a way to win and for me this season will be no different.

I think if you offered Ferguson 10pts from a possible 15pts in these games at the start of the season he would have accepted immediately, so in this sense United have got off to a pretty good start, particularly given they don’t usually pick up form until Christmas-time.

During the course of the next 10 weeks or so Manchester City have to travel to Stamford Bridge to face Chelsea and Anfield to do battle with Liverpool, they also have to entertain a resurgent Arsenal at the Etihad stadium and let us not forget the amount of points they dropped against smaller outfits last season.

The season is still very, very young and United have a chance to close the gap on their city rivals over the coming fixtures, I appreciate there are ‘no easy games’ in the Premier League any more but I am willing to state that over the coming 10 matches or so the red side of Manchester have the easier fixtures

If they can bounce back against Everton FC on the weekend and hit the ground running as we head into the busy festive period, I would strongly advise halting all bets on City to win the league as United have shown time and time again that they understand exactly what it takes to be Champions – something not demonstrated or matched by classy Arsenal, big spending Chelsea or anyone else asides the great Liverpool team’s of the 70s/80s.

‘Blue Moon Rising??’ Maybe – but there is a long way to go before they dislodge the red devils from their seemingly permanent residence as the English nations most successful and supported outfit. Outstanding day for the blues – no doubt – but let’s put this game into context at the end of the season.

I would not be surprised at all if Sundays result is viewed as the ‘turning point’ in United’s season for years to come; the day they upped their game and went on to win the league… Remember I said it!