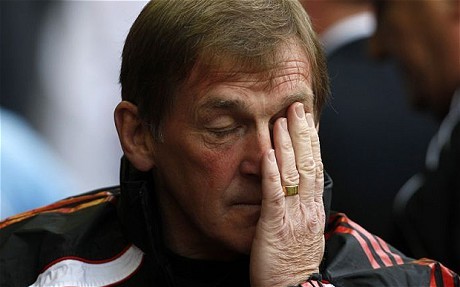 Despite a fantastically entertaining season with a raft of Premier League winners this term, it has been a campaign to forget for some teams and individuals. Euro 2012, the Olympics and the summer transfer window are approaching, and for some 2011-12 could not come to an end quick enough.

Despite lifting the Carling Cup with victory over Cardiff, 2011/12 has been the worst campaign for Liverpool for quite some time. The Anfield outfit’s fans expected their side to be challenging for a top four berth, but a eighth place finish, 17 points adrift of Tottenham in fourth, has been a massive disappointment.

From Fenway Sports Group’s ill-fated home-grown transfer policy, to Luis Suarez’s racism ban, defeat in the FA Cup final to embarrassing home defeats to some of the division’s lesser lights, Liverpool fans will want to forget 2011/12.

After leading Porto to an unbeaten league title and lifting the Europa League in 2010/11, Andre Villas Boas was heralded as the next Jose Mourinho and the man to lead Chelsea back to the summit of the Premier League. However, an at times bullish squad rotation system saw the senior players at the club alienated, the Blues floundering outside of the top four and Villas Boas given Roman Abramovich’s axe.

The £13 million Chelsea paid Porto for AVB’s services was not rewarded, and the young trainer is still out of work after seeing his stock drop in west London.

Wolves have been in a fight to stay in the Premier League over the last number of seasons, but Mick McCarthy has led them to survival and commanded the respect of the squad. Steve Morgan’s decision to sack McCarthy, despite a poor run of form, was an ill-sighted one, and the appointment of assistant Terry Connor a disaster.

The Molineux club reportedly interviewed the likes of Alan Curbishley and Steve Bruce for the role, but were reluctant to offer the experienced pair long-term contracts. The appointment of Connor has backfired, with the club finishing bottom with a woeful five wins all season.

2011/12 will be a season to forget for Sir Alex Ferguson and Manchester United. The Old Trafford outfit are known for their will to win and mental toughness at the business end of the season, but the relinquishing of an eight-point lead is sure to give the legendary Scottish manager nightmares for years to come.

A lame Champions League exit in the group stages, a 6-1 hammering from City at Old Trafford and FA Cup elimination to Liverpool have been hard to take for the defending champions’ fans.

Alex McLeish was a shock appointment at Villa Park last summer given his links to rivals Birmingham City, and the club’s supporters have not warmed to the Scot since. A toothless tally of seven wins, weak defending, a lack of creativity and the division’s second-lowest goal tally have had the Villa fans with their heads in their hands.

McLeish’s position as Villa manager must come under scrutiny this summer, but Randy Lerner must also invest in new players if the team are to have a better 2012/13 – Stewart Downing and Ashley Young have simply not been replaced.