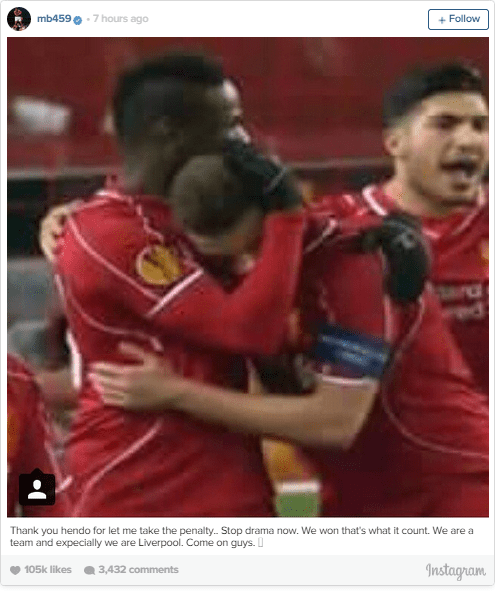 While ruffling a few feathers and raising further questions about his ability to toe the party line, Mario Balotelli can at least feel justified having scored the decisive goal from the penalty spot for Liverpool against Besiktas in last night’s Europa League last 32 match.

Of course, had he missed then it would have been a different story. But he didn’t. He is a proven penalty taker in big matches who has a good record. Jordan Henderson, who he took the ball off, is not – probably because he does not have much experience of them.

So while it can be said that Balotelli was being his customary egotistical self – with Steven Gerrard saying his actions were disrespectful – perhaps the real question is why was Henderson the man tasked with such a crucial kick by Brendan Rodgers? Surely Daniel Sturridge should have been ahead of the midfielder in the pecking order?

In Balotelli’s defence, he came on as a substitute and would no doubt argue that the pre-match instructions changed as soon as he, the striker and penalty specialist, came into the fray. And the way the Italian delivered the kick certainly showed his expertise in this department.

The whole episode will inevitably lead to further questions over Balotelli’s future, but Liverpool fans should at least be pleased to see the former Manchester City striker is not lacking in confidence despite his barren season.

Balotelli even found support from former Anfield favourite Jamie Carragher, who has been critical of the player, and Didi Hamann.

Pressure pen late in a big European game you want your best man on it. Balotelli was that man!

Also just heard it was Henderson supposed to be on them not Sturridge, more reason for Mario to take it!!!

Balotelli had to take that penalty, he’s the best at it. No point for anybody else to get involved.