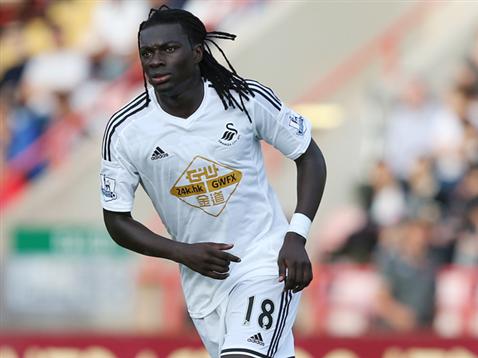 Take no heed of Swansea Manager’s present conclusion on the ineffectiveness of Bafetimbi Gomis when it comes to grabbing the gold of the game that is goals.  When a manager claims a player is “trying too hard” (http://www.bbc.co.uk/sport/0/football/31303114), it is about as stark an admission of cluelessness as to the root of the problem as can be.  Managers want players to try very, very, very hard…then a bit more.  Trying hard is what managers want from all of their players, and if the managerial eye has proven keen to bringing in good talent, then solid effort allied with talent will generally lead to success of sorts.

Bafetimbi Gomis is a good player, absolutely, but whether he is the man to plough Swansea back onto, not just the winning trail, but more importantly, the form trail, remains to be seen.  Swansea have won 3 of their past 8 league games, which does not send out a code-red alert, but taking a closer look at the victories suggests fans should be weary.  Not deeply concerned, just weary.  The three victories comprise of one very lucky win against a dominant Southampton (despite what Monk says about the perfect execution of a gameplan) plus two single-goal wins against Hull and Aston Villa.  Now, if you are a fan of either Hull or Aston Villa, then now certainly is the time to be sending out a code-red alert and exuding a state of deep concern!

If Gomis is to achieve the feat of dragging an out-of-sorts Swansea back into Saturday-betting fans’ minds, he has a bigger job than is shown by a quick look at things, as he will be effectively overcoming a greater challenge at the same time…replacing the irrepressible Wilfried Bony (9 league goals in 20 Swansea games).  He came, he muscled, he conquered.  Although the £29 million outlay remains a little bloated, he is certainly a ‘£20 million player’…and that is one team that can afford a few extra pounds, even when it is a few million of them!  Gomis currently boasts 4 goals for the season, but only one of these has arrived in the league, and this sits beside only two goal assists (both in cup games).  He has played 25 games (20 in the league), but in fairness, more than half of these have been accrued from the substitute’s bench.  This may explain the heavy-considering by the club of the £7 million January offer (providing a £7 million profit for Swansea) from West Ham Utd.  However, Garry Monk could not afford to let more than one striker go, even an at-present ineffective one.

In a decade of French football, Gomis was never what could be termed a ‘proven goalscorer’.  His numbers were consistent, but in a league where defending is not at its most ruthless and average strikers can make great plunder, consistently average at the same time.  From 2006-2014 he struck a minimum of 10 goals each campaign, with a high of 16 goals (in both 2007/08 with Saint Etienne and 2012/13 with Lyon).  These are respectable figures for teams which were not dominating their league at the time which can tend to show deceptive scoring figures for some world strikers.  Gomis has played 12 games for his national team spanning 8 years.  Perhaps the best example of Gomis’ standing in French football is told in the fact that with his last 2 appearances for the French national team, both times he was substituting for Olivier Giroud.  Arsenal’s Giroud is himself a man who operates just below the highest level of strikers, and Gomis would seem one further level down from that.

Talking tactics, Swansea’s favoured tactic of operating with a lone striker and beefing up the midfield with creative and fast players such as Nathan dyer, Wayne Routledge and Gylfi Sigurdsson should perfectly suit Gomis’ game.  The team have been playing in such a manner for a long time, so the players surrounding Gomis should be effective, competent and well-learned at playing chief supporting roles to a big man up front (Gomis only being very marginally taller than the 6ft Bony).  It is clear that he poses problems for defenders, and turns well for a man of his stature.  Also, positional awareness is an astute quality.  Yet, he often has the look of a player that knows what he is doing, but directly before doing it, has a mental conflict with himself and does not execute as originally intended.

Although, this is a player deemed worthy of a £10 million investment by Lyon in 2009, and Swansea will easily make a profit from due to their free transfer in 2014.  Swansea’s next 3 games of West Brom (position 15th), Man Utd (4th) and Burnley (17th) would be the ideal place for a man so used to scoring 10 goals per league campaign.  Currently sitting on 1 goal, it will need to be an intelligent use of muscle-power and trying very, very, very hard which will do it for him.