Arsenal vs Tottenham: Who makes the combined XI?

Tottenham and Arsenal take each other on in the North London derby on Sunday. Which players make our combined team?

Spurs’ 1-1 draw against Leicester City on Saturday meant they had conceded only five goals in their opening ten games — the best defensive record in the division so far. Lloris has been crucial to the team’s resilience and often gets ignored from the list of best goalkeepers across Europe. Petr Cech has also had a good season protecting the goal, but Lloris gets the vote in this battle.

The Tottenham left-back has been one of the best players for the side this season. Not only is he an important reason why the side has been so tight at the back, with his impressive defensive contribution, but he is also exceedingly well in the offense. He averages 3.8 tackles and 1.8 interceptions every 90 minutes, which highlights his impressive form.

Arsenal and Tottenham have two of the best centre-back partnerships in the league. With Alderweireld injured, the Arsenal duo gets the nod. 24-year-old Mustafi has proved to be one of the “signings of the season,” and his arrival means, for the first time in a long time, it looks like Arsenal have found a great centre-back partnership. Laurent Koscielny finally has a worthy partner at the back. Mustafi and Koscielny are both quick and good in the air. They are strong in both boxes and provide set piece threat as well.

This was perhaps the closest battle but the one to narrowly emerge victorious is Spurs’ Kyle Walker. Bellerin is one of the most talented young players out there, and Walker’s improvement under Pochettino has been unbelievable. In this extremely close race, Walker was our pick based on statistics and the fact that Spurs have conceded five goals in the league, while Arsenal have shipped ten. 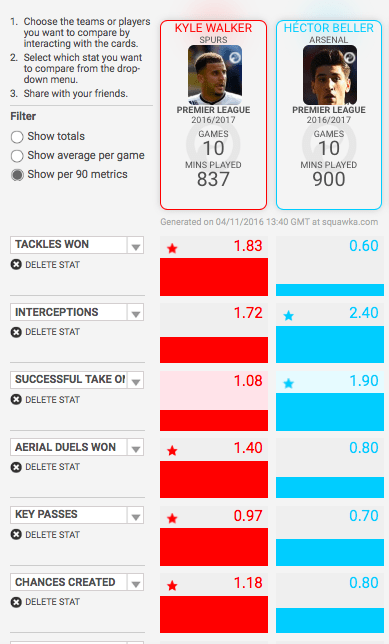 The Kenyan, who sealed an £11m switch from Southampton in the summer, has impressed so far this season. The 25-year-old has done well protecting the defence, which is his main job, but has equally impressed taking the ball forward.

Granit Xhaka‘s suspension made our pick for the second midfield spot comparatively easier. Dembélé’s importance to the Spurs team was highlighted in his absence early in the season. Dembélé solidifies the base of midfield and provides the platform to attack. It is of little surprise that Tottenham’s attack does much better with Dembélé in the team. Dembélé’s ability to hold, carry and distribute possession makes him a potent weapon to have. Tottenham would hope he is fit to play against Arsenal this weekend, for he may be carrying a knock.

It seemed like Walcott’s injury curse had returned but reports suggest Walcott will start against Spurs. The England international has enjoyed a resurgence this season. In 9 Premier League games, the attacker has scored five goals and grabbed two assists. Considering his form this season, this pick was a no-brainer.

The German international has picked up form lately, and along with creating chances, is also producing significant output. He comes into this game with a goal and an assist against Ludogarets in the Champions League. He is in great form at the moment. Dele Alli and Christian Eriksen don’t have much going, which makes this choice even easier.

The South Korean was close to leaving the Spurs this summer, but a conversation with Pochettino changed his inclination. It looks like it was a good decision for both the player and the club. In 6 Premier League starts, he has scored 4 goals and received 2 assists. While the output has dried up in the last few games, Son is capable of delivering.

The decision to deploy Sánchez as a number nine seemed to be a poor one initially, but the Chilean has since settled into the role. He has six goals and two assists in the Premier League this season. Kane didn’t perform at the start of the season and is currently a doubt for this game. Sánchez is clearly the pick.