Alberto Aquilani’s recent move to AC Milan stands as a visual representation of Kenny Daglish’s football ideology. While Liverpool’s recent treatment of Aquilani is at best confusing, and at worst troubling, it most likely typifies the philosophy of the pragmatic Scotsman who currently wears the crown at Anfield. Daglish stands at the nodal point of two paths. The right-hand one favours British solidity, reliability, and the inevitable slide to long-ball football. The left-hand path favours foreign guile, technique and creativity. Now Aquilani has been allowed to leave with only 9 Premier League starts to his name, it would confirm that Daglish as set his steps firmly to the right.

If he was to go for as little as 6million, it could be the worst bit of business Liverpool have done since Benitez let Xavi Alonso go. The last time a creative and technically brilliant midfielder was allowed to walk out of Anfield it left a a hole so big that his absence is still felt to this day. Every time Christian Poulsen pulled on the red jersey for Hodgson last season, the ghost of Alonso could be seen roaming the Kop. Similarly, the influence of ‘Il Principino’ (The Little Prince) on the Liverpool midfield is currently expressed by his notable absence.

The recent game against Arsenal serves as a case in point. For 71 minutes Liverpool’s midfield was solid, workman-like, and reliable. Lucas, Adam and Henderson collectively completed 81% of their passes, made 14/21 successful tackles and limited Arsenal to only 55 successful passes in the final third.

Yet despite all the solidity Liverpool rarely threatened the Arsenal goal. Out of 10 attempts on goal only 3 were on target, only two of which were inside the penalty area. In total, only 3 attempts were inside the box. Only 2 of 15 attempted crosses to the head of Andy Carroll were successful. Liverpool were heading towards a ‘well-earned’ away draw; exactly the kind of game they need to win if they are to finish in the top-four with any degree of comfort. The height of Andy Carroll was just to tempting for the passing of Charlie Adam and Stuart Downing, put it never looked like unlocking the (significantly weakened after the injury to Konscielny) Arsenal defence.

The game turned in the 71st minute. Frimpong was sent off leaving space on the field, and two of Liverpool’s more creatively minded players were introduced: Luiz Suarez and Raul Merieles. After the arrival of Luiz Suarez and Raul Merieles all of the 4 attempts on target were inside the box, and as can be seen from the chalkboard below, Liverpool’s play shifted slightly to be higher up the pitch, particularly in and around the penalty area. 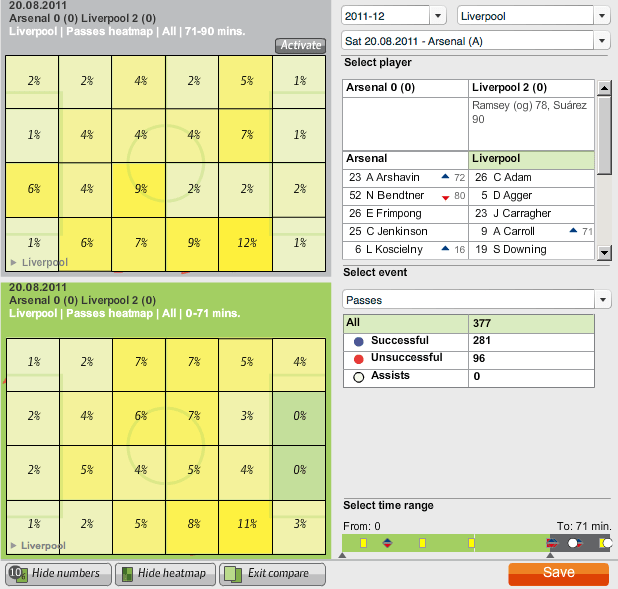 Admittedly, the dismissal of Frimpong made a significant difference, freeing up space in front of the Arsenal defence for Liverpool to work in. However the fact still remains: Suarez and Merieles were the only Liverpool players who demonstrated the creativity to get behind the Arsenal defence, and were heavily involved in both Liverpool goals.

Aquilani is a player of that mould; one who possesses the creativity to get behind stubborn defences. Considering the rumours this summer that Merieles might also be surplus to requirement at Anfield, this particular character trait doesn’t seem to be particuarly high on Daglish’s agenda. In a choice between the long-passing game of the Scottish Charlie Adam, and the creative ingenuity of the Italian Aquilani.

Whether or not Adam will prove to have the quality to be a Liverpool player remains to be seen; he is only three competitive games into his Anfield career. Nevertheless, it seems a foolish decision to allow the wealth of talent in Aquilani to leave for as little as 6million, rather than give him a chance to impress this season. It seems like a decision borne mostly out of ideology rather than footballing sense.