Media reports in Holland say that Alexander Buttner has traveled to Manchester to undergo a medical ahead of a potential £3.5m-£4m move to Manchester United.

Buttner is a 23 year-old left sided player who can play higher on the wing or as left back, came through the Ajax youth ranks and currently plays for Vitesse Arnhem. He was reportedly a Southampton target earlier in the summer (for about half the fee, go figure) but that deal fell through (failed medical? other clubs?).

Since most people following United have no clue about who Buttner is (except Vitesse Arnhem fans), we thought we’d get the next best thing, a Football Manager profile.

Football Manager Story picks up his trail from FM12: 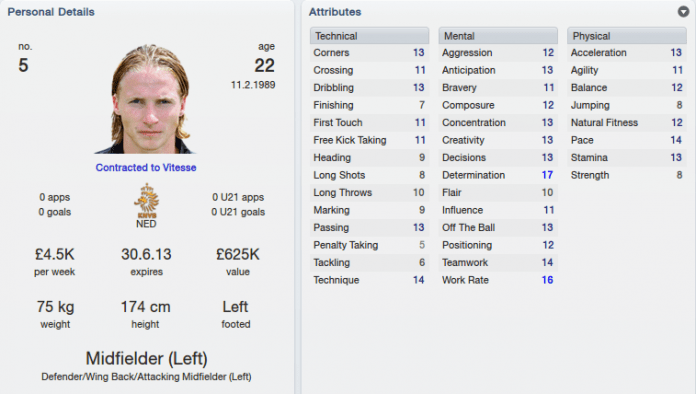 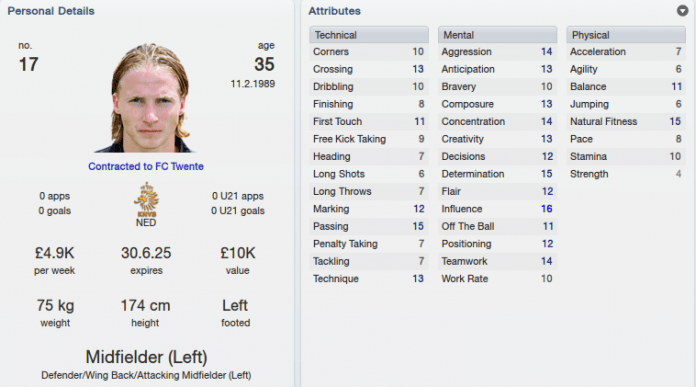 He returned to Holland for the last few years of his career, joining FC Twente, also on a free transfer. In fact, he only moved clubs on free transfers or on loan. He has announced his retirement from professional football at the end of the 2024-2025 season, at the age of 35.

Regarding his attributes in the game, he impresses with his versatility, work rate, determination and intelligence on the pitch, but that’s about all that’s above the average. I have set Francis Cagigao, one of Arsenal’s best scouts, to compile a report on the player in 2011. His verdict: a fairly good signing for the Gunners, available for around 2 million pounds.

Early opinions are that Buttner has been signed as cover. That ignores everything you know about Ferguson – he never buys young players as merely ‘cover’. With Blanc he wanted experience in central defence and experience in the dressing room, and for that he excused the occasional error on the field. With Owen he wanted to bring in experience once again, not necessarily cover. RVP doesn’t count as cover in any sense of the word but again, his experience is something Ferguson has quoted as being vital (alongside his undoubted talent).

Bottom line – Fergie brings in players that have more to offer to the team than just making up the numbers – he may make errors in judgment, but there’s always a logical (Ferguson’s logic) reason behind it.

If Buttner does sign for Man Utd, the reason is simple – Ferguson is looking for a full-back who can play the John O’Shea role for the long run, and he feels that Buttner has the necessary ingredients to play that role, despite being a relatively unknown name.

It’ll be interesting to see how he performs (if he signs) – he’ll be second-choice to Evra in the meantime and may fill in at right-back if Rafael is injured (keep in mind that Smalling, Jones and Evans are out at the start, so senior full-backs left). Worst-case scenario for him would be to be shipped out in January or June after getting no games, but in an ideal world you’d like to see a left-field signing like this come good and play for several years at the top level.

Add this to Berbatov’s potential sale to Sunderland and the presumed arrival of Hector Herrera in central midfield, and you may have just seen United finish their transfer business in a very under-stated fashion (barring RVP).