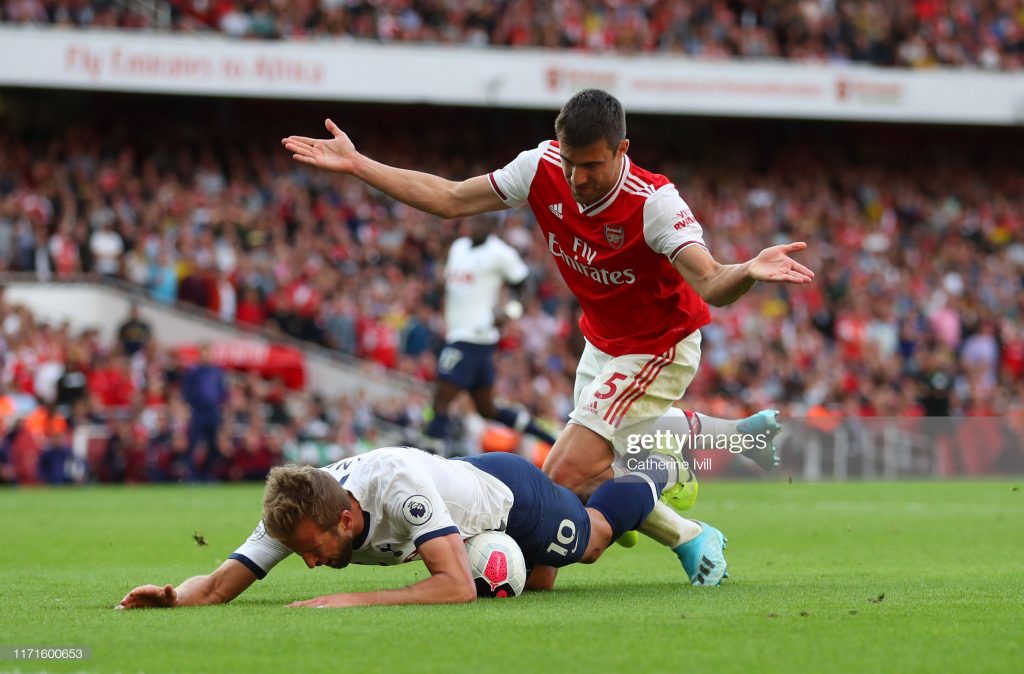 Arsenal came from two goals down to hold Tottenham Hotspur to a 2-2 draw at The Emirates Stadium on Sunday.

Early first-half goals from Christian Eriksen and Harry Kane had put Mauricio Pochettino’s men ahead, but the Gunners pulled one back in the closing minutes heading into the break through Alexandre Lacazette.

Despite dominating proceeding in the second-half, Arsenal could only score once thanks to Pierre-Emerick Aubameyang.

Tottenham appealed for a penalty in the closing stages of the game after Sokratis appeared to have fouled Harry Kane in the box, but referee Martin Atkinson waved play on instead, and neither did the VAR interfered.

Premier League legend Alan Shearer believes it was the right call as the Spurs striker only tried to create contact, and he also reckons the lack of defensive shield for the back-four will be worrying for Pochettino.

“Kane claimed a penalty at the end but I didn’t think it was one – he tried to create the contact. It was end-to-end, I couldn’t believe how open the game was,” the former Newcastle United striker told The Sun.

“A great North London derby for the neutral because the defences were pretty poor.

“The lack of protection in front of both back fours will be pretty worrying for their managers.”

Spurs were without Tanguy Ndombele after their club-record signing picked up an injury two weeks ago, and the pair of Moussa Sissoko and Harry Winks couldn’t really offer their defence much-needed protection in his absence.

With Victor Wanyama out of the first-team picture and set to leave Tottenham before the end of the day, Pochettino isn’t particularly well-boosted in the defensive midfield department, and Ndombele’s unavailability really showed how thin their squad depth is.