A section of Newcastle United fans yelled outside Sports Direct on Northumberland Street on Sunday ahead of the kick-off against Arsenal, as a staunch protest against the owner Mike Ashley.

Amidst the downpour at Tyneside, a group of indignant fans held a banner that read  – ‘We don’t demand a team that wins, we demand a club that tries’ – echoing the sentiments that are commonly repeated by the exasperated fans. 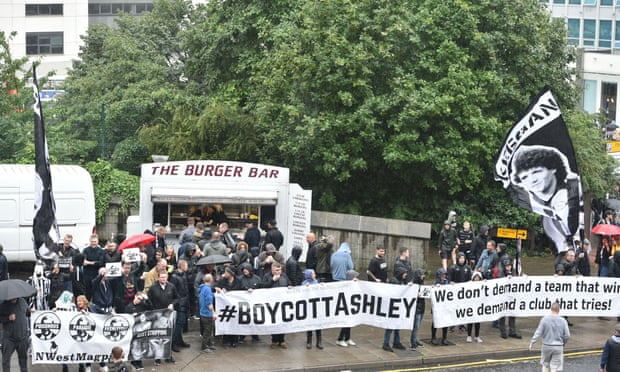 Newcastle United legend turned popular football pundit Alan Shearer has suggested in his column for The Sun hat the fans have every right to protest against the owner.

He said that he didn’t notice too many protests in the stadium, and feels Steve Bruce has the confidence of the Magpies fans.

“I didn’t see too many protests in the stadium. There were about 47,000 people there at St James’ Park — so there were around 5,000 missing,” wrote Shearer for The Sun.

The fans were behind Steve and that’s good to see but their issue isn’t with him, it’s with the ownership. That’s been their issue and I totally get that.”

The majority of the Newcastle fans were enraged when the club decided to part ways with Rafael Benitez this summer. Bruce was not the type of manager many fans wanted, but as always, the Magpies fans are known for their solidarity and support for their manager and the players.

Bruce may be an unpopular choice, but he is not the target of fury, at least at this moment. The fans are venting their frustration on the damaging ownership as they feel they have to act now against the regime that has delivered two relegations in more than a decade.