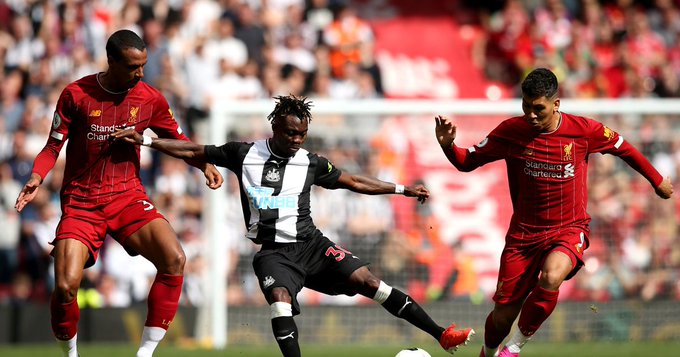 Liverpool maintained their 100% start to the 2019-20 Premier League campaign after winning 3-1 against Newcastle United at Anfield on Saturday.

The visitors took an early lead in the seventh minute when wing-back Jetro Willems curled a fine shot past Reds’ goalkeeper Adrian.

Liverpool responded quickly and made it 2-1 at the break, thanks to two goals from Sadio Mane.

Newcastle’s Emil Krafth came close to scoring in the second half, but apart from that the home side were rarely troubled.

In the 72nd minute, Mohamed Salah extended the lead with a cool finish following a brilliant assist by Roberto Firmino.

The Brazilian has been superb in the second half and was a treat to watch.

With this victory, the Reds have become the first team to ever win 14 top-flight games in a row. Also, they scored at least twice in every match under Jurgen Klopp.

Former Liverpool defender turned football pundit Alan Kennedy was covering the game on BBC Radio. He summed it up the performances of both the teams:

“Newcastle have put their heart and soul into the game but the just aren’t good enough. Liverpool have been superb, clinical and collected. They have been very good to watch. They have been disciplined throughout.”

Liverpool enjoyed 76% of possession during the game, and registered 21 shots of which they managed to keep nine on target.