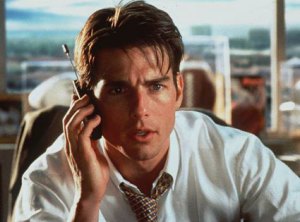 My favourite film of all time is Jerry Maguire. I am not a big Tom Cruise film fan, but the portrayal of an American Sports Agent won Cruise an Oscar nomination and it is hard not to disagree with the plaudits it got.

“I will not rest until I have you holding a Coke, wearing your own shoe, playing a Sega game *featuring you*, while singing your own song in a new commercial, *starring you*, broadcast during the Superbowl, in a game that you are winning, and I will not *sleep* until that happens. I’ll give you fifteen minutes to call me back.”

It also increased the enquiries that our Football Association had about becoming an agent by over 1000%. Nothing to do with the money at all then? If I was to tell you that an agent on average makes 12% of their clients salary, and more on any transfer fees, would you be interested? Maybe? Well, what if I told you all you need to do to have a license to print money is a multiple choice test would you be keen then?

One of the best known agents in English football is Rachel Anderson. Rachel first came to prominence of football fans as the agent of Julian Dicks, at the time West Ham’s “wild child”. In a male dominated environment, Rachel has not only survived but has flourished and today has her own Management company. What made her choose to swim with the sharks?

“My inspiration was my parents, both of whom were trail blazers both commercially and personally. They are a hard act to follow and it is still a work in progress. As well as a lifelong National Union of Journalist member, I have always been an agent for someone in some form. I have represented the likes of MCA, Universal, BBC and Paramount throughout Europe, dealing with issuing licenses for their merchandising and marketing for the likes of Superman, Bugs Bunny and various superheroes.”

So how did she manage to convince Julian to use her services?

“I did not use a sales pitch at all – he was aware of how successful I was in my own business and wanted me to assist him in his. It was his left foot and tenacity that other players had to worry about! It is a shame his total commitment to playing and winning is not more apparent in today’s game. Off the field he is a real pussy cat.”

Back in the day, anyone could be an agent. Simply form a company, call yourself and agent, give the FA a call and tell them and simply find a player stupid enough (and there were thousands) to think you are doing them any good and you were away. The process was changed, as Rachel Anderson explains:-

“At the time agents were required to give FIFA 200,000 Swiss Francs (about £100,000 at the time) to FIFA which they kept to compensate any greviences which may arise.”

Then FIFA started realising that things were getting a bit out of control, so someone came up with the simple answer – a 20 question multiple choice test, taken twice a year. So from March 2001 a new process came into play.

But not everyone needs an agent. A player can be legally represented by a Parent, Sibling or Partner. Remember the unbelievable case of Jermaine Defoe’s Mum representing him in his transfer to Spurs from Portsmouth? Strange yes but within the rules (although there was an alleged advisor to Mrs Defoe present as well – perfectly legally of course).  Players themselves are not allowed to use anyone who isn’t registered or they can be fined or even banned by FIFA.

Is it any wonder with such lax rules agents get such bad publicity. There are currently over 1,200 licensed agents in the UK alone. There are approximately 2,100 professional players in England so there hardly seems enough to go around. But with the average annual salary of even a League Two player now over £60,000 per annum you can see that a few young players signed up and you are creaming off 15% for nothing. Bag a Premier League player and immediately you will be earning over £250,000 on a three year deal, excluding any endorsements you may sign up.

“It is a lottery and has no bearing on the individuals experience or expertise.” Anderson thinks. So what is being done to clean up the industry?

Rachel Anderson takes up the story again. “The AFA (Association of Football Agents) who represent 90% of all English agents, is already in place and is gathering strength day by day. Similar organisations are in place in other countries.”

The Football League are one of the main organisations trying to clean up the game. They publish a twice annual report showing the activity of agents in the Football Leagues. Their last report, published in August 2009 covered the first half of 2009, and had some interesting revelations:-

The lowest spender in the Championship was Scunthorpe United with just a £33k outlay. In League One the total spend was just over £2.24m (up from £1m last season), with Leeds United, Norwich City and Southampton all spending over £330k on fees. One league below and the total was £336k with Notts County spending the most on over £246k alone. So the onus is also on the clubs themselves. “A fit and proper person procedure to be implemented and adhered to, especially for those wishing to own and run a football club” is supposed to be in place but is this no more than a criminal record check?

So what now for agents? Jerry Maguire needed to shout “Show me the money” to his client to get him onside. Today it seems like a quiet word in a players ear outside the training ground is enough. Most top profile managers have been forthright in their views of the influence of agents on destabilising players.

Roberto Martinez, launched a scathing attack on football agents, describing them as an “unhealthy corruption” in the modern game earlier in January. The Wigan Athletic manager was speaking in reference to Maynor Figueroa, a player he believes has been unsettled by his agent’s attempts to engineer a move to Sunderland in the January window. Martinez suggested that the defender’s performance in his side’s 2-1 defeat at Blackburn Rovers last season had been affected by the prospect of a transfer, despite Wigan Athletic’s insistence that Figueroa is not for sale.

But can the game be cleaned up from within when certain managers still have such an influence in the transfer market?  BBC’s Panorama programme famously went undercover in 2006 to try and expose the truth. Whilst they caught some “interesting” things on film, not one official charge was made on the back of the programme. The Lord Stevens investigation also failed to bring anyone to justice, either proving that the game is clean and free from corruption although there have still been no cases brought to justice. Another idea has been the introduction of a maximum wage, which good old Jimmy Hill did so much to abolish back in the 1960’s.

Many see this as the end to greedy players and silly transfers, but there is another side to the coin as Rachel Anderson explains:- “I do hope that the maximum wage is never re-introduced as this will be the day when the underhand payments will be back in the game once more. There will always be ways and means of attracting the star players, albeit by giving them a car or two, houses or indeed “employing” family members. It is a fact of life that there will always be some club owners with deeper pockets than others who will go to extreme lengths to get their man.”

So there we have it. Is it any wonder that the industry gets such bad press sometimes when the process has been largely unregulated in the past. Changes are being made all the time but where there is money there will always be those who are willing to go to any lengths to get some. Some agents such as Anderson, Zahavi and Stretford have been in the industry for decades, and are obviously very good at what they do. But is there a future for them?

“As long as there are people willing to exploit players they will always require an agent to protect them. No one, not even the most astute agent, is capable of dealing with matters objectively when it concerns their own ability and worth. Players need someone, outside of their family and employer with whom they can trust and confide in.”